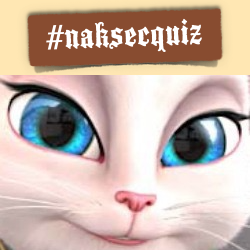 Well, OK, it was February, and there most definitely wasn’t a miniature paedophile camped out in the dilated pupils of popular cartoon cat app Talking Angela.

But that didn’t stop a tidal wave of people claiming there was.

The Talking Angela tsunami broke with spectacular effect in February 2014, a year after we first reported on it. A conspiracy theory that started in 2013 with people expressing unease about the questions that Outfit7’s furry chat bot asked had morphed into an all-consuming internet meme that was as catchy as it was ugly and preposterous.

If you don’t believe me, just read the comments people left on our article:

The Talking Angela witch hunt –
what on earth is going on?

And for your chance to win an exclusive, limited edition, Naked Security T-shirt, work out the answer to Paul Ducklin’s Talking Angela brain teaser below…