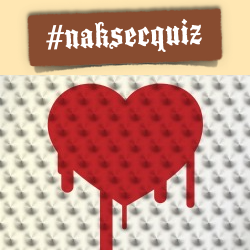 Karaoke time! Click for the melody to sing along…

OpenSSL is the boring but enormously important piece of open source encryption software that’s used by just about everybody and his dog.

In April 2014 websites everywhere were struck by an OpenSSL bug that allowed attackers to trick them into revealing fleeting glimpses of data that just happened to be in memory on the server at the time.

Most often, the fragments of data revealed by the bug contained boring and unimportant data, but once in a while, secrets such as server encryption keys were blurted out.

As sysadmins the world over got patching, a media storm erupted and a trend for bugs with clever names and fancy logos began.

Paul Ducklin explained how it all worked in his usual technical-yet-comprehensible way:

Anatomy of a data leakage bug
– the “Heartbleed” buffer overflow

And for your chance to win an exclusive, limited edition, Naked Security T-shirt, work out the answer to Paul Ducklin’s Heartbleed brain teaser below…

What was Day 2’s answer?

On Day 2, we asked you how by how many days Windows Server 2003 would officially outlive Windows XP.

Very simply put, we wanted you to calculate the number of days between these Microsoft-specified dates:

Those are both Patch Tuesdays, of course, and the de facto release time for Microsoft’s updates is 10am Seattle time, so we assumed a precise number of days with no rounding needed.

We accept that some people count, or used to count, that way.

In biblical times, for example, it was perfectly usual, which is why there’s a famous quotation from Jesus that goes, “Today, and tomorrow, and the third day.”

He didn’t mean, say, Monday, Tuesday and Thursday; he meant three consecutive days, adding in both the first and the last.

But we wanted a 21st-century days-between-dates calculation, so those of you who said 463 were, sadly, incorrect.