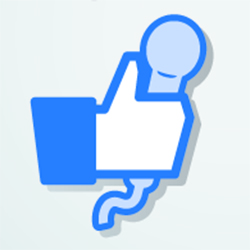 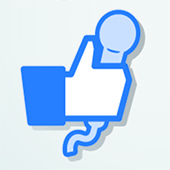 The US Supreme Court on Monday began to wrestle with violent rap lyrics, internet trolling, and the notion that posting bomb and homicide threats is a form of therapy in which a now-jailed ranter could vent his frustration and thereby not really intend to kill anybody.

The ranter in question is Anthony Elonis, a Pennsylvania man who had adopted the rap persona Tone Dougie.

In 2010, his wife left him and took their two kids with her. He responded by writing death threats – or rap lyrics, as his defense contends – on Facebook.

Elonis is currently serving a 44-month prison term for making death threats not only against his wife but also against his former amusement park coworkers, its patrons, and police.

He also threatened to shoot up a class full of kindergarteners, as well as posting that he would slit the throat of an FBI agent, adding that he was strapped with explosives. 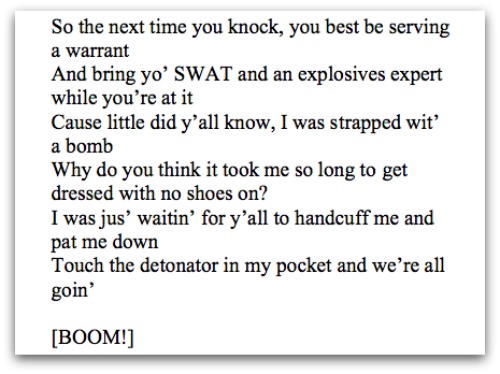 So the next time you knock, you best be serving a warrant

Cause little did y'all know, I was strapped wit' a bomb

Why do you think it took me so long to get dressed with no shoes on?

Touch the detonator in my pocket and we're all goin'

His appeal has wound its way all the way up to Washington on the grounds that rather than being actual death threats meant to be taken seriously, these posts are rap lyrics, written as a form of anger management therapy that made Elonis less likely to act out his violent fantasies.

As such, his writings should be protected under the First Amendment as free speech, according to Elonis’s defense.

The Obama administration has held that threats don’t have to be reflections of real intent in order to cause harm: just the act of threatening in itself does harm, the argument goes.

According to reporters who observed the Supreme Court’s nine justices as they heard the hour-long oral arguments in the case, there was little sympathy to be had for Elonis on Monday.

However, several justices did express concern that prosecutors were interpreting the definition of threatening language too broadly and risked paralysing harmless internet chat or chilling political dissent in the future.

Elonis’s lawyer, John Elwood, warned that such prosecutions are targeting people who are just shooting off their mouths online – a demographic that inevitably includes teenagers.

Many of the speakers who are online and many of the people who are being prosecuted now are teenagers who are essentially shooting off their mouths or making sort of ill-timed, sarcastic comments which wind up getting them thrown in jail.

Elwood suggested hypothetical postings that could potentially be taken out of context and deemed to be violent threats, including a Ferguson, Missouri protestor who might tweet Thomas Jefferson’s famous line, “the tree of liberty must be refreshed from time to time with the blood of patriots and tyrants”, or anti-abortion campaigners quoting from the “turn or burn” passage in the Bible, which reads “But unless you repent, you too will all perish.”

In preparation to hear this case, the justices have been reading a scholarly work on rap prepared by First Amendment and rap music scholars.

Rap is extremely susceptible to misinterpretation, the court document explains, given that it features exaggeration, metaphor, and, above all else, wordplay.

That means that while it’s “emerged as a voice for marginalized people” – most particularly African Americans – it’s drawn the “ire and vitriol” of police, politicians, religious leaders and civic groups.

Elonis’s isn’t the first rap-related case to reach the courts. One such was Illinois v. Oduwole, a terrorist threats case involving writings that “constituted the formative stages of a rap song” by a defendant with an “aspiring rap career”.

The court won’t issue its final opinion for several weeks, but justices reportedly appeared to sway from right to left as they worried about free-speech implications.

The Guardian quotes a few justices, including Elena Kagan:

We typically say that the First Amendment requires a kind of a buffer zone to ensure that even stuff that is wrongful maybe is permitted because we don’t want to chill innocent behaviour.

We’ve been loath to create more exceptions to the First Amendment.

Normally somewhat more conservative Chief Justice John Roberts, who is a fierce advocate of free speech and who quoted vividly threatening lyrics from rap artist Eminem’s “’97 Bonnie and Clyde,” in which Eminem seems to threaten to drown his wife:

What about the language at pages 54 to 55 of the Petitioner’s brief? You know, "Da-da make a nice bed for mommy at the bottom of the lake," "tie a rope around a rock"?

Roberts then asked Michael R. Dreeben, a government lawyer, whether that lyric was grounds for prosecution.

Dreeben said no and started to say something about context, but the Chief Justice interrupted:

Because Eminem said it instead of somebody else?

Some of the justices weren’t sold on the free-speech argument, calling Elonis’s lyrics basically worthless.

This sounds like a road map for threatening a spouse and getting away with it. You put it in rhyme and you put some stuff about the internet on it and you say, "I’m an aspiring rap artist." And so then you are free from prosecution.

The court has found in the past that “true threats” aren’t protected speech, but the definition of what constitutes a true threat hasn’t been clarified, as Justice Anthony M. Kennedy noted:

I’m not sure that the court did either the law or the English language much of a good service when it said "true threat". It could mean so many things.

The justices are nervous about having to crawl into somebody’s head in order to determine the intent behind their threats, as Justice Ruth Bader Ginsburg’s line of questioning shows:

How does one prove what’s in somebody else’s mind? In this case, the standard was "Would a reasonable person think that the words would put someone in fear?" and reasonable people can make that judgment. But how would the government prove whether this threat in the mind of the threatener was genuine?

Chief Justice Roberts got some laughs when he tried to refine her point:

If there is such a thing.

The Guardian reports that the bench appears to be leaning toward returning the case to the original court for a retrial under a narrower definition of “threat”, rather than setting in stone a new legal precedent on the growing issue of internet threats and risking damage to free-speech protections.

It is very easy to stay stupid stuff online, and it’s also very hard to tell if somebody’s joking, venting, or has serious intent to do harm. We will be watching this case with interest.