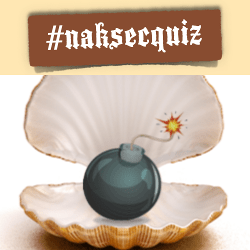 If Heartbleed started a trend for giving vulnerabilities theatrical monikers instead of numeric IDs, then this bug from September nailed it.

For good or for ill it seems that from now on coding mis-steps that pose a significant danger to a sizeable number of computers will have names that sound more like the stars of the latest Transformers movie and less like supplemental tax forms.

Bash “Shellshock”
vulnerability –
what you
need to know

What was Day 9’s answer?

Day 9’s topic was the U2 album that iTunes users “got for free” from Apple, except it didn’t quite turn out like that.

What actually happened is that the album was credited to you as a purchase, and then showed up on your device automatically. As for the Day 9 question, we drew an admittedly very thin link between the privacy implications of being deemed to have bought something without consent, and the history of surveillance.

A thin link, indeed, but it allowed us to ask you a question about U2’s namesake, the high-flying U-2 aircraft.

Apparently, the U-2’s first flight was unusual, because initial testing was only supposed to involve burbling the plane along the runway to see how it would taxi, given its unconventional landing gear.

But its glider-like wings produced so much lift that it took off anyway.