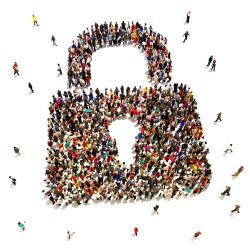 A recent survey has found that 60% of people have heard of Edward Snowden and his revelations about the degree of surveillance conducted by the US National Security Agency (NSA) and other countries’ intelligence agencies, and 39% of them have taken steps to protect their privacy as a result.

The Canadian Centre for International Governance last month released the results of the survey of 23,376 internet users in 24 countries.

One of the study’s takeaways: compared to one year ago, when revelations were still rolling out in NSA-gate, 43% of users now avoid certain websites and applications and 39% now change their passwords regularly. 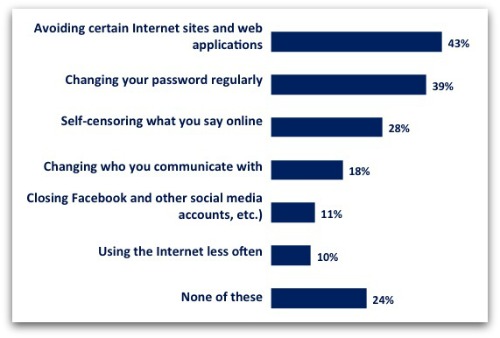 Here’s the country-by-country breakdown of who’s doing what:

You’ll notice that nowhere have I said “only” 39%, nor have I glued “a whopping” to the front of it. The question is how, exactly, do we spin that number?

Do we wring our hands over a majority of internet users apparently being blasé about surveillance, as some media write-ups have done, or do we cheer for those who’ve taken steps to avoid surveillance – a number estimated to be more than 700 million individuals worldwide?

These statistics are clearly in the eye of the beholder, as can be seen by comments as varied as these from International Business Times readers:

A lot of people care. Unfortunately, most Americans are mushy-brained nationalists.

As security expert Bruce Schneier noted about the varying interpretation of the statistics, the number of all people taking steps to protect their privacy is even smaller than 39%, given that it’s just 39% of the subset (60%) of internet users who’ve actually heard of him.

But he doesn’t think those numbers point to an apathetic internet. Quite the contrary.

After running the actual numbers country by country, combining data on internet penetration with data from the survey, he’s come to the conclusion that Snowden is having “an enormous effect”:

Multiplying everything out, I calculate that 706 million people have changed their behavior on the internet because of what the NSA and GCHQ are doing. (For example, 17% of Indonesians use the internet, 64% of them have heard of Snowden and 62% of them have taken steps to protect their privacy, which equals 17 million people out of its total 250-million population.)

Note that the countries in this survey only cover 4.7 billion out of a total 7 billion world population. Taking the conservative estimates that 20% of the remaining population uses the internet, 40% of them have heard of Snowden, and 25% of those have done something about it, that's an additional 46 million people around the world.

On the “merely”/”only” side of the statistics take is the mismatch between the number of people who’ve taken steps to avoid surveillance and the number of respondents who reported that they’re concerned about secret monitoring of online activities by other countries – 62% of respondents.

61% reported being concerned about police or other government agencies from their own country doing this. 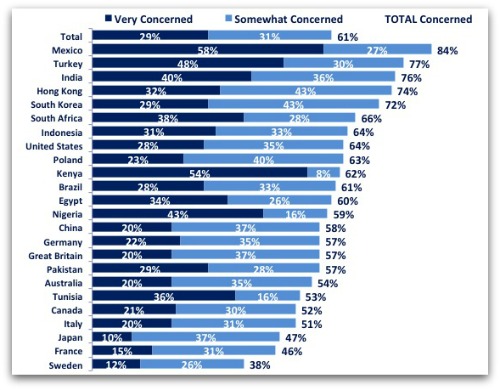 And 64% of respondents have “some degree of concern” about their online privacy compared to a year ago. 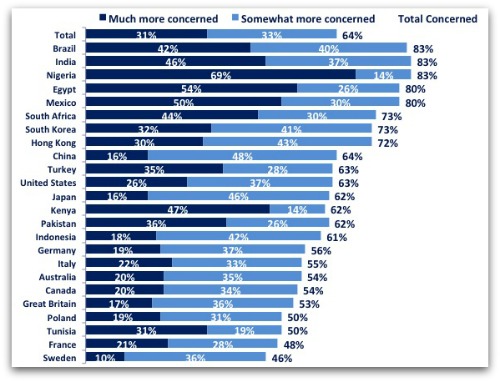 Besides the question of apathy vs. agency (as in, the capacity of a person to act in the world, as opposed to the CIA type of agency!) is this question: what’s keeping people from taking action to protect themselves from surveillance?

The Guardian has an open thread on this question, and opinions are covering a range of hypotheses.

An excerpt from one such, from 2ndGenBBC, selected as a Guardian Pick:

1. They are too comfortable to protest and/or have bigger existential things to worry about in the current economic climate like, how do I pay the next bill or put food on the table.

2. The majority of "users" feel utterly helpless when it comes [to] computers. They can use them, but they don't understand them, just like most people use their cars but are unable to fix them.

3. Cryptography is a specialist's game. Most people, whether qualified in science/maths or not, will have absolutely no clue how it works or is implemented.

4. They think the best they can do is follow the crowd in terms of security and rely on the goodwill of the Silicon Valley giants to do it for them.

5. Convenience. A lot of the services are designed around convenience not anonymity and for the reasons above people just carry on using those services.

What about you? Doing anything different post-Snowden revelations? Please do share it below in the comments section if you are.

If you’re not, why not? Are you unsure of what to do? Are you skeptical that anything will really work to keep Big Brother out of your business – be it governments or corporations that profit from knowing about you?

As for me, I’m optimistic about things changing. Look at Apple and Google’s moves to bake in encryption: moves that intelligence agencies have protested, asking that tech companies leave backdoors open for them to exploit.

It takes time for revelations to percolate and turn into resolution.