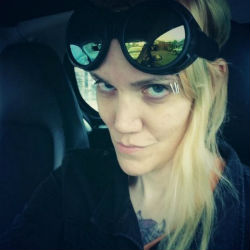 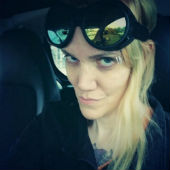 An 8chan forum thread (since removed) detailing a plan to swat “pixel artist” and game developer Grace Lynn led to about 20 police officers surrounding a home in the US city of Portland, Oregon on Friday night.

If Friday’s botched swat wasn’t potentially lethal, it would be amusing, given that whoever called in the bogus emergency report got his victim’s address wrong.

Lynn hadn’t lived there for a year, she said.

The artist was once on GamerGate’s side but defected to become a critic of the movement.

The #gamergate hashtag acts as a rallying banner for a group that has polarised the gaming community.

The GamerGate controversy, which dates to August 2014, concerns a number of aspects of video game culture: sexism and misogyny in the community, for one, as well as questions about journalistic ethics – particularly conflicts of interest between video game journalists and developers whose seeds lie in the fact that the first video game publications were products of the gaming companies themselves.

When Lynn joined the ranks of GamerGate critics, she made herself a target.

Friday’s swatting incident didn’t reach the level of calling in an actual SWAT team, but as The Oregonian reports, about 20 police officers responded to a bogus emergency call about an armed man holding residents hostage inside the home.

Lynn spotted the plan to swat her on an 8chan pro-GamerGate forum thread.

She gave police a heads-up about the hoax, as she described in a series of tweets. 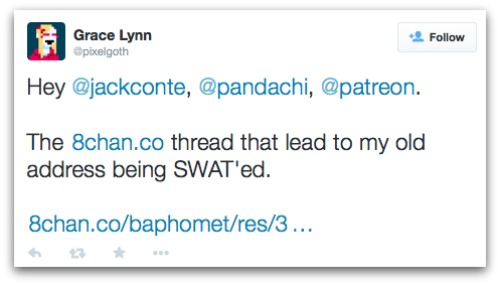 The original thread, posted by 8chan user Swat Anon and reprinted by Ars Technica – offered to either dox (i.e., publish individuals’ personal information) suggested targets and/or to swat them:

I'm bored, so if someone gets post ending in 88 I will do one of the following:

-If they are already doxed I will swat them, results are normally pretty noteworthy

-If they aren't doxed I will attempt to dox them and swat them. If I can't dox them (rare) I will chose the next post and so on.

Also, all hate should be directed towards @Eclipso on twitter, it's me. F*ck you, SJWs.

PS, I'm behind 7 proxies and I live in Serbia

Targets of swatting have ranged from celebrities to journalists.

Targets of people acting in support of GamerGate have included at least three female game developers.

A recent case was that of Brianna Wu, who was driven from her home in October after a troll posted her address online and threatened to rape, kill and mutilate her.

Swatters think of these stunts as pranks, but they’re costly jokes on a few levels.

From the perspective of cost alone, it’s estimated that each SWAT operation sets taxpayers back about $10,000.

On 1 January 2014, a California law took effect requiring people convicted of swatting to pay the full cost of the emergency response.

Passage of the bill was prompted by a rash of swatting incidents targeting celebrities including Ashton Kutcher, Tom Cruise, the Kardashians, Chris Brown, Miley Cyrus, Justin Bieber, Clint Eastwood, and state Senator Ted Lieu: a Democrat who sponsored the bill.

These are also potentially lethal jokes, given that they can entail emergency responders surrounding homes with their fingers on the triggers of weapons.

Thankfully, law enforcement is increasingly savvy about the practice of swatting. They’re not taken in as easily as all that.

Hopefully, would-be swatters will themselves get more savvy about the fact that their stunts can have repercussions that involve jail time and stiff fines.

Let’s pray that they wise up fast.