WhatsApp has started giving out 24 hour bans to those using a third party Android app to send and receive messages through its service.

WhatsApp Plus – also known as WhatsApp+ – allows you to customize the app with different colours and themes, and also offers the option to block contacts from seeing when you were last online while still allowing you to see when others were.

You have to uninstall the official WhatsApp in order to use the Plus service, and WhatsApp’s not happy about it.

Now, when opening the app, the offending users are being greeted with a 24-hour countdown clock and the message: “You’re temporarily banned from WhatsApp because you may have violated our terms of service.” 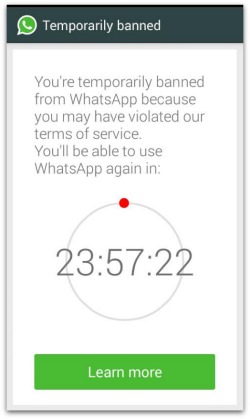 Owner of the WhatsApp Plus Google+ page, Dr. Mounib Al Rifai said this morning that he’s been forced to shut down the service after receiving a cease and desist letter from WhatsApp.

WhatsApp posted the following FAQ to its site:

Why am I banned for using WhatsApp Plus and how do I get unbanned?

WhatsApp Plus is an application that was not developed by WhatsApp, nor is it authorized by WhatsApp. The developers of WhatsApp Plus have no relationship to WhatsApp, and we do not support WhatsApp Plus. Please be aware that WhatsApp Plus contains source code which WhatsApp cannot guarantee as safe and that your private information is potentially being passed to 3rd parties without your knowledge or authorization.

Last October, some Snapchat users discovered just what the risks of using a third party service were.

Snapsaved.com was a third party site for those hoping to hold on to Snapchats for a bit longer than the maximum limit of 10 seconds, all without the snap-sender knowing that the image had been saved.

Except Snapsaved didn’t have quite the same security restrictions in place as Snapchat and it was hacked, leaving 200,000 of the saved images exposed.

Of course, WhatsApp has other reasons to prevent people using its service via third parties, such as potential future advertising revenue. It also only implemented end-to-end encryption on its own services in November 2014.

And while it’s probably appropriate to be more sceptical of unofficial apps than official ones, there are plenty of ‘official’ apps that behave in ways users might not realise or be comfortable with.

It’s worth running a good anti-virus on your phone, such as Sophos Mobile Security for Android which scans apps as you install them and at set intervals later.

You can also stay up to date with the most recent Naked Security news by signing up to our daily newsletter, or liking our page on Facebook