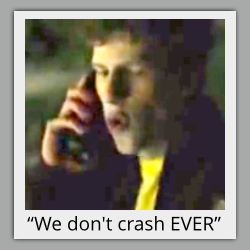 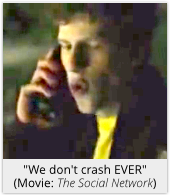 That was made perfectly clear in the dramatic scene where Zuckerberg falls out with his sidekick Eduardo Saverin, ranting that, “We don’t crash EVER.”

But what if someone else takes the site down – does that count as a “crash”?

Because reports are circulating to suggest that hacking-and-cracking crew Lizard Squad is claiming to have done just that:

A bit of an irony there, having people who report the news reporting that someone else who reported the news was not merely reporting it, but was actually its cause.

In fact, it looks as though Facebook and various associated sites did indeed “crash,” or at least become inaccessible due to changes made by Facebook itself.

As reported by the BBC, Facebook has as good as ‘fessed up, saying that it made some changes that broke access to its sites, before quickly rolling back the changes and ended the outages.

There are two morals in this story:

By the way, we’re not saying you should learn to live without Facebook altogether.

But for those admittedly rare occasions when it’s not there, you might want to practise alternative approaches to sharing your life with other people.

While Facebook was down, I nailed a picture of my breakfast to a tree outside our house. Seven people have knocked to say they liked it.

Mind you, Coleman did need Twitter to spread the message about his breakfast photo.