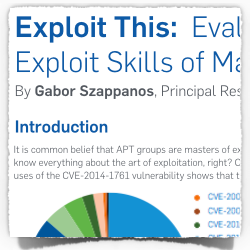 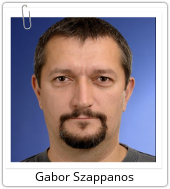 Regular readers will recognise the name Gabor Szappanos, a SophosLabs expert whose expertise and research features regularly at conferences and on this site.

Szappi, as we shall abbreviate him from now on, decided to pick one vulnerability from about a year ago, known as CVE-2014-1761.

He investigated its abuse in a wide range of known attacks.

In particular, he looked at how the crooks had evolved their understanding and exploitation of this hole since it first appeared.

It is a common practice in the anti-malware world that security products are compared to each other in comparative tests. Even the tests themselves can be evaluated in relation to the criteria of the Anti-Malware Testing Standards Organization. The only players who are not rated are the malware authors. This is for a good reason: their activities cover a wide range of operations that don’t fully match and can't be exactly measured.

There [aren't] common criteria for rating them, although this information could be useful for the defenders: it is always good to know the strength of the enemy at the other side of the gate.

Notably, Szappi compares the skills of so-called Advanced Persistent Threat (APT) attackers, who typically have focused targets and motivations (e.g. state-based intelligence collection), and “regular” cybercrooks, who are unashamedly after all of us for anything they can get that can be turned into ill-gotten financial gain.

The result is a fascinating paper entitled Exploit This: Evaluating the Exploit Skills of Malware Groups. 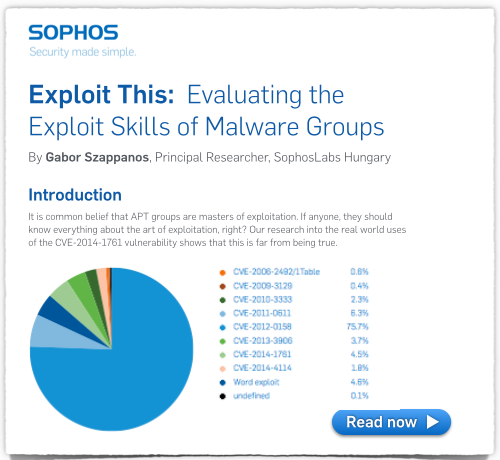 CVE-2014-1761 is a bug in how RTF (Rich Text Format) files are handled when they are opened in an unpatched version of Microsoft Word.

Booby-trapped data is carefully buried in an RTF file – data that ought simply to be rejected, or to appear as meaningless but harmless garbage – so that using the file will crash Word, wrest back control of the processor, and infect your computer.

You’ll know his sort of attack as a drive-by install, because the dodgy file takes over without any of the usual pop-up warnings about executing software from an untrusted source; and you’ll know the exploit trickery it uses as a Remote Code Execution hole, or RCE, because that’s what exactly what happens.

Usually, an attack unfolds when you click a web link leading to a harmless-looking RTF document, or open an email with some kind of interesting-looking RTF attachment.

And RTF files look as harmless as can be: rich text format is a text-based markup language that describes in vaguely human-readable form what a document is supposed to look like.

In other words, RTF files make excellent attack documents because they don’t carry the “risk reputation” of files such as SWF (Flash), PDF or even Word’s native .DOC and .DOCX formats.

As well as taking over your computer with an RCE exploit, booby-trapped documents of the sort anaylsed by Szappi typically have another trick up their sleeves.

If the exploit works, instead of leaving you with the tell-tale sign of a crashed Word and no visible document at all, the attacker finishes off by restarting Word and loading up a so-called decoy document, carried along as part of the original booby-trapped file, that looks realistic.

In Szappi’s samples, the decoys ranged from male dating ads, to correspondence from the Lomonosov Moscow State University, to travel articles: 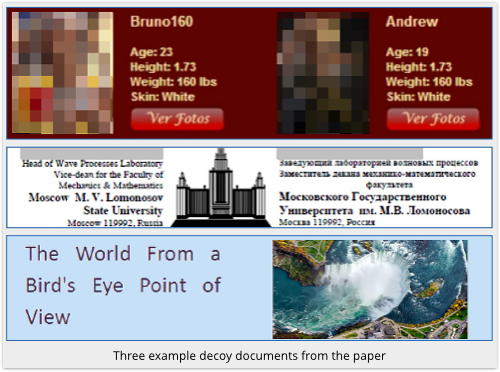 How the crooks fared

Interestingly, Szappi found that the “regular” crooks were smarter, faster and more effective at taking existing attacks and breathing new life into them.

In contrast, the APT attackers seemed less advanced, though in fairness, they only ever need to be more advanced that the victims they have in their sights at any time.

Why burn an brand new exploit when your target is still using an unpatched Word 2010 from a year ago?

As Szappi concludes (my emphasis):

Despite all this, one should never underestimate the malware authors mentioned in this report. They develop sophisticated Trojan families, and they manage to deploy them successfully to high profile organizations. The fact that they are not the masters of exploitation doesn’t mean that they are any less dangerous.

There’s a fair amount of technical detail in the paper, which makes it handy for security analysts and reverse engineers, but even if you aren’t technical, you can skip the detail and just follow the fascinating tale of the evolution of a widely-abused security hole.

So I strongly recommend it to techies and non-techies alike.

It’s an insightful and thought-provoking journey into the machinations of the cyberunderworld.

3 comments on ““Exploit This”: Evaluating the exploit skills of malware groups”