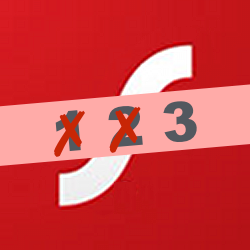 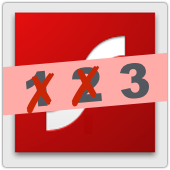 It looks as though once, no, sorry, twice hasn’t been enough zero-day trouble for Adobe lately.

Details are still [2015-02-03T12:00Z] pretty scarce on this one, so it’s hard to confirm exactly what Adobe is warning about, and where it has recorded attacks.

But it’s definitely a zero-day.

A critical vulnerability (CVE-2015-0313) exists in Adobe Flash Player 16.0.0.296 and earlier versions for Windows and Macintosh. Successful exploitation could cause a crash and potentially allow an attacker to take control of the affected system. We are aware of reports that this vulnerability is being actively exploited in the wild via drive-by-download attacks against systems running Internet Explorer and Firefox on Windows 8.1 and below.

Once again, the security protections such as execution prevention (DEP) and address-space randomisation (ASLR) built in to Windows 8.1, and the various sandbox limitations in Internet Explorer and Firefox, have been neutralised by a buggy browser plugin.

Reports from SophosLabs suggest that this zero-day has been seen in poisoned HTML adverts that were used to deliver an exploit kit called HanJuan.

An exploit kit is a suite of cybercrime tools that can turn a web server into a launching pad for drive-by installs.

Merely visiting a poisoned web page is enough to throw a spanner in the works of an unpatched browser or plugin and gain remote control over your computer.

Generally speaking, exploit kits start out with an HTML file that loads what you might call an “exploit selector,” usually written in JavaScript.

This script tries to guess which vulnerabilities are most likely to work on your computer, based on browser version, available plugins, and other settings, and then lets rip one-by-one with specific exploits until one of the following happens:

When new exploits are discovered, they can be added by the crooks into existing exploit kits.

But brand new exploits are not necessarily deployed immediately.

Releasing a previously-unused zero-day exploit obviously brings it into circulation, meaning that it can now be analysed and patched by the vendor of the software it attacks.

So, if the old exploits are still delivering good results, a crook might keep the 0-day up his sleeve a bit longer.

On the other hand, the longer he waits, the more likely it is that someone else will find the same vulnerability, which could mean that it gets patched first, and thus never gets a chance to be a true 0-day.

(Zero-day means that the exploit comes out before any patches are ready, thus giving even quick-on-the-draw sysadmins zero days to patch in advance.)

Adobe has started work on fixing the CVE-2015-0313 hole, and says that it “expects to release an update for Flash Player during the week of February 2, 2015.”

Even a zero-day exploit is very often preventable with a good proactive anti-virus, by one or more of these interventions:

Of course, by not allowing Flash in your browser at all, you will sidestep any cybercriminals who are using it as a malware infection vector.

So, here are our Top Three tips for dealing with Flash:

Seriously: if you haven’t yet tried living without Flash for a few days, why not do so now?

You can either turn off the Flash plugin in your browser, or uninstall the Flash player altogether.

If you find sites that simply won’t work without Flash, you can always turn it back on or reinstall.

You never know: you may find that everything you require on the internet, and most things you want, work just fine without Flash.

After all, it’s more than three years since Adobe pulled the plug on browser Flash on iOS and Android, and the wheels haven’t come of either of those platforms yet…