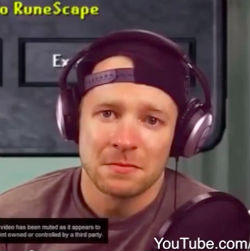 A gamer has posted a video of his tearful reaction after he was swatted in the middle of a live Twitch stream of RuneScape.

The video shows him just moments after armed police stormed his house, pointed their guns at his 10-year-old brother who answered the door, and forced the gamer himself to lie face down on the floor in yet another swatting incident in the gamer community.

I see you posting my address. I had police point a gun at my little brothers because of you. They could have been shot. They could have died. Because you chose to swat my stream. I don’t give a sh*t about what you have against me, or what I did to you. For that I am ... I am at a loss for words. Your gripe is with me. So let it be with me. But do not involve my family in any way, shape or form with this. They don’t deserve that.

Joshua Peters, 27, goes by the alias Koopatroopa787 to live-stream his gaming on Twitch.TV for almost 60,000 followers from his home in St. Cloud, Minnesota, in the US.

On Wednesday, while he streamed during RuneScape, his noise-canceling headphones muffled the sounds of the 10 armed police who stormed his house.

His live stream from that day shows Peters’s reaction when his mother’s voice penetrates the headphones to inform him that the police are there.

He arose, confused and concerned, told his followers that the police were there, and left the screen.

After some 15 minutes, Peters returned to the live stream to leave the emotional message above for whomever did this to him and his family.

The next day, he told The Guardian that he hadn’t seen it coming:

My channel's not crazy big, like some of these other mainstream streamers. I just didn’t expect that. I was going upstairs, and before I knew it, my face was on a tile on the ground, hands wide open and a bunch of police officers with assault rifles.

In Peters’s case, he told viewers later, the perpetrator called to tell police that someone “had shot their roommate and now they were pointing their gun at them”. “Two gun shots” were apparently heard before the call ended.

Swatting is far from new, particularly with regards to Twitch.TV, where it’s becoming more and more common, with the responsible trolls seldom suffering consequences.

In fact, a live video platform such as Twitch adds a voyeuristic twist to this already puerile, dangerous stunt, allowing the perpetrators to watch the whole situation unfold, live, with a built-in audience.

Although this was the first swatting incident the St. Cloud police say they’ve experienced, like most police nowadays, they’re familiar with the practice.

In fact, just the mention of Twitch helped to defuse the situation, Peters said:

When we were all laying down, I spoke out. I said 'I stream on Twitch.TV, I’m being swatted, and someone probably prank-called this'. And then the tone shifted as soon as I said 'I'm streaming on Twitch.TV.'

But the swatter(s) didn’t leave it at just one incident. He, or she, or they, tried again, posing as one of Peters’s family members to call police and tell them he was suicidal about the raid.

Fortunately, the police didn’t rise to the bait the second time. They made sure to vet the call before wasting their time responding to yet another prank.

Peters is one of many who’ve been either randomly targeted or purposefully singled out as part of ongoing campaigns of harassment.

A recently launched network, Crash Override is aimed at helping such victims.

The network, which its founders describe as an “online anti-harassment task force”, is devoted to helping victims of doxing/swatting in the ongoing Gamergate battle.

One of the would-be swatting victims helped out by the proactive work of the network was Israel Galvez, a web developer and Gamergate critic who was the target of a swatting attempt that came out of a forum linked to Gamergate.

Crash Override, which monitors known troll forums, in January gave police a heads-up about Galvez’s likelihood of being targeted.

When police subsequently received a bogus message about a “cylinder thing with duct tape wrapped around it” that was supposedly to be found within their target’s house, police knew to dial down their reaction.

In other words, they knocked with their fists, not with their boots, averting a potentially dangerous incident.

As Peters’s horrific experience shows, these vicious attacks can come out of nowhere, sparked by absolutely nothing, rising up to silently blindside both you and the innocents around you.

13 comments on “Gamer swatted while live-streaming on Twitch.TV”