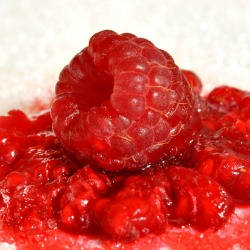 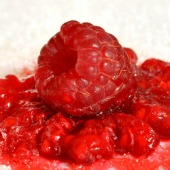 Owners of the recently released Raspberry Pi 2 – the itty bitty, budget computer – have found that the credit-card-sized systems reboot when users snap a flash photo of the units.

It’s the most adorable bug ever, Raspberry Pi Foundation Head of Communications Liz Upton said when she posted about the finding on Monday.

Not only is the bug harmless, it’s also packing a bonus lesson about Albert Einstein’s discovery that when light hits a component, it generates a charge, Upton says:

If you own a Raspberry Pi 2, congratulations: you’re also the proud owner of an elegant demonstration of the photoelectric effect!

Peter Onion, a veteran of Raspberry Pi forums, on Saturday posted about his discovery that the Raspberry Pi 2 is camera shy.

Onion found that when he snapped a photo of the computer with a flash, it causes an instant power-down.

The Raspberry Pi Foundation – founded in 2009 to promote the study of basic computer science in schools – took a look.

Here’s a screenshot that shows what happens when the Pi encounters intense bursts of certain types of light: 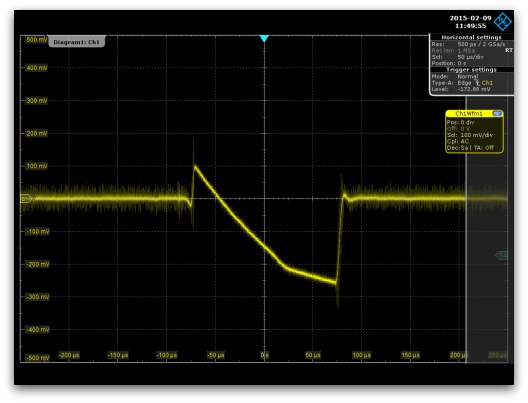 Fortunately, the Foundation found that the Pi won’t suffer any permanent effects from being flashed, Upton said.

That doesn’t make it a great idea to take lots of photos of your Pi or to interrogate it with laser pointers, though, given that the subsequent crashing or rebooting could corrupt an SD card, she said.

The Foundation also found that the fainting spells happen only under very specific circumstances: namely, given flashes of high-intensity, long-wave light, which include laser pointers and xenon flashes in cameras.

Such bursts of light affect the device that regulates the processor core power.

That’s the chip marked U16 in the silkscreening on the Pi 2, between the USB power supply and the HDMI port, which Upton says you can spot because it’s a bit shinier than the components around it.

The problem is found in a component known as the WL-CSP package: a bare silicon die with tiny blobs of solder attached.

This is a picture of the underside of a similar package, greatly magnified. Each circle is a minuscule ball of solder: 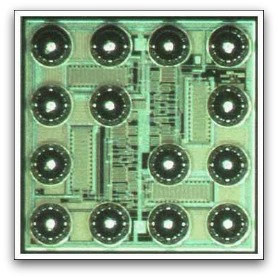 Very high-intensity light bursts “confuse” that component and cause the core voltage to drop, making the Pi a terrible prospect for an Academy Award, Upton says:

You can take your naked Pi 2 in the sunshine for a picnic or take it to a rave, and it’ll be perfectly solid. Just don’t take it on the red carpet at the Oscars. Jon is currently shining an 1800-lumen led light at a Pi 2 on his desk: not a wobble.

Upton stressed that neither sunlight, indoor lighting, nor rampaging cyclists shining their bike lights at Pis will cause this to happen, so no worries in such situations.

If you do need to use a Pi 2 where it will be flashed at, you can protect it easily enough: use a small blob of Sugru – which calls itself the “exciting self-setting rubber for fixing, modifying and improving your stuff” that bonds to almost anything and which turns into a strong, flexible silicone rubber overnight – or Blu-Tak, which is another blob-forming substance – in this case, a reusable, putty-like, pressure-sensitive adhesive.

Slap a dab of either on top of the whole component, or take a cue from the forums and use a pellet of bread.

It is, Upton notes, the “first yeasted bug fix” the Foundation has encountered.

The Foundation is investigating just what, exactly, happens when the component gets flashed with a high energy pulse from a xenon flash tube. It’s also looking at possible ways to make future production Pis immune to this issue (if possible), given that it knows how much PI users love to snap photos of them.

At any rate, Raspberry Pi creator Eben Upton told the BBC that he’s not too upset about the bug:

If this was destroying devices I would be less cheerful about it.

If I had to pick a bug in the Raspberry Pi, excessive sensitivity to paparazzi is the one I would pick.