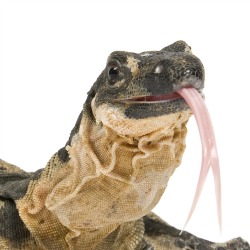 The group first targeted Sony in August when it launched a DDoS attack against the PlayStation Network (PSN).

Then, over the Christmas period, it launched similar attacks against Microsoft’s Xbox Live, as well as PSN again.

In January, the tables were then turned on Lizard Squad after the hacking of its own DDoS-for-hire service LizardStresser.

And in the last two months two alleged Lizard Squad members have been arrested.

But on Saturday the group reappeared, apparently turning its attention to Daybreak Games – previously known as Sony Online Entertainment – who reported that its servers were being attacked.

The company said many of its online games, including the newly released zombie survival MMO H1Z1, were experiencing connection issues.

Daybreak Games president John Smedley explained that the game was being targeted by a DDoS attack which prompted a reply from someone using the Squad’s hatted-lizard image, and the account handle @LizardPhoenix:

The group and Smedley already have some history of course – in August 2014, a bomb threat was sent to a plane on which Smedley – then the Sony Online Entertainment president – was travelling.

Since then, Sony sold Sony Online Entertainment to Columbus Nova which renamed the studio Daybreak Games.

The group claimed responsibility for the Xbox Live outage, saying that the attack was orchestrated in association with another group called Like No Other (LNO):

XBL attack was done with the help of our associates from LNO: @LNOuNiTy @LNOVenom @Guidelines @we_are_lno

By way of celebration, Lizard Squad followed that tweet up with another which read: