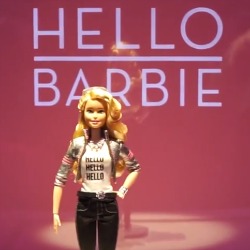 The BBC reports that a prototype of this joke-telling, story-swapping, interactive game-playing toy was introduced at the New York Toy Fair on Saturday. 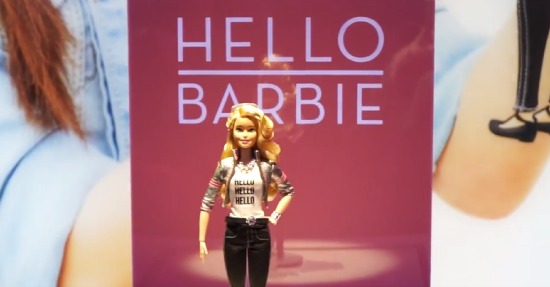 I, like what Barbie maker Mattel says are “girls around the world”, desperately want to talk to a plastic doll, in a far more meaningful and bi-directional way than ever.

So I immediately hopped online to do a search for a video that would give me a preview.

What popped up first was, well, not the “Hello Barbie” doll herself, but the “Come On Barbie, Let’s Go Party” song. If you’ve never heard it, it features really nice lyrics about partying with Barbie, and touching her everywhere, and… hang on one minute…

Kiss me here, touch me there, hanky panky!

Oh dear no, we don’t want any talk of touching or hanky panky with a Wi-Fi-enabled toy, yikes!

That gives me flashbacks to the horrific stalker child predator lurking behind that demon feline Talking Angela, the smartphone app with the talking cat, behind whose eyes you could see a guy in a room! Snapping pictures of kids!!

The lurking paedophile who supposedly defied the laws of physics to show up in an animated cat’s eyeballs over the internet was, of course, just an extremely widespread, notably spittle-flecked hoax.

Could be. Wouldn’t be terribly surprising.

But beyond baseless hoax mongering that could scare people away from a perfectly innocent doll – one with software that’s upgraded over Wi-Fi and will at some point be giving your kids career advice, learning as it interacts, much like Apple’s digital helper Siri or Microsoft’s virtual assistant Cortana – there does, in fact, lie the potential for actual hacking.

The thing is, internet-enabled toys are just about as safe from hacking as internet anything.

We’ve already seen proof that such toys are vulnerable. As the BBC reports, the Vivid Toy group released Cayla, a doll that uses speech-recognition and Google’s translation tools, in November.

By January, security researcher Ken Munro had discovered a vulnerability in the doll’s software that allowed for it to be compromised and programmed to say anything, including things that you certainly wouldn’t want your children to hear.

In fact, The Mirror got Munro to make Cayla quote Hannibal Lecter and lines from “50 Shades Of Grey.”

Munro warned that if a Cayla owner’s phone is off or out of range, any device could effectively connect with the doll via Bluetooth and therefore communicate with your child.

We don’t want to hear Hello Barbie giggling about fava beans and a nice Chianti. Let’s hope Mattel locks her down with better security than Cayla got.

Here’s a preview of what Hello Barbie’s supposed to sound like, courtesy of Chip Chick.

4 comments on “Get ready for the internet-enabled, speech recognising, joke-telling Barbie”