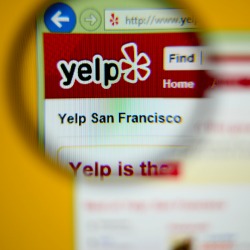 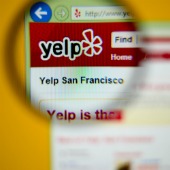 Yelp is suing Revleap, a company that promises to sell improved ratings to businesses but which Yelp claims does nothing more than lie and spam both Yelp’s customers and Revleap clients’ customers.

Revleap, a Los Angeles-based company that’s also done business under the names Yelp Director and Revpley, promises its clients “a large constant flow of positive reviews that stay on top of your profile and remove [sic] fake reviews.”

Yelp filed the lawsuit on Friday.

In the complaint, Yelp says that in 2013, it found out about the defendants’ Yelp Director business, which was purportedly selling 4 and 5 star Yelp reviews and promising to filter out any reviews with 1 to 3 stars.

It was spamming businesses listed on Yelp, using registered trademarks to confuse recipients into thinking that Yelp itself was sponsoring the service, Yelp claims.

The service promised to keep a business’s positive reviews on the first page, free from being buried by Yelp’s mysterious algorithms.

It also promised that, based on some sort of counter-Yelp-algorithm, the negative reviews – 3 star and below – will get pushed to the back, and quarantined in the service’s “Control Center” for a business’s “quality control”.

Yelp said in a blog post that it’s just a scam.

Revleap has no way of either removing or submerging bad reviews, Yelp says, or getting the good ones to float up to the first page, meaning that its messages are knowingly false.

In fact, the one thing that Revleap does do is spam a business’s customers, dangling the chance to win gift cards in exchange for writing positive reviews about Revleap’s clients, Yelp says:

Revleap, which has cycled through various names including "Yelpdirector" and "Revpley," has spammed businesses with unsolicited messages claiming that they can get good reviews to stick and remove bad reviews. One thing Revleap actually does, it seems, is bombard their clients' customers with surveys. Customers that respond favorably, and agree to post a review, are entered in a drawing for gift cards in an effort to deceptively boost their clients' reputations.

IT World reports that Revleap’s owners were dismayed when they heard about the lawsuit. Co-owner Alec Farwell told the publication that Yelp is “destroying small business owners” and called the accusations “ridiculous.”

Yelp’s content guidelines, outlined in its terms of service, outlaw compensation for writing a review or removing a review, for posting fake reviews, or for other conduct that could lead to biased reviews, including manipulating the site’s search results.

The lawsuit is seen as ironic by many online commenters who suggest that doctoring reviews is only allowable if it’s Yelp who’s doing it.

Charges of Yelp’s heavy-handedness in selling ads – its only revenue stream – have included many businesses that claim they’ve been extorted to buy ads by Yelp’s aggressive sales team.

In January 2015, those complaints were tossed out when the FTC wound up a year-long investigation – its second such inquiry – with the conclusion that those who complain about Yelp gaming its reviews don’t have a leg to stand on.

A recent case over Yelp’s tactics was dismissed in September 2014 by the US 9th Circuit Court of Appeals in San Francisco, with the court having found that as far as placement on the site goes, Yelp has the right to arrange its reviews as it sees fit.

It also has the right to engage in what the businesses call “extortion”, but what the court itself called “hard bargaining”.

One comment on “Yelp sues Revleap for claiming it sells good reviews, buries the bad ones”