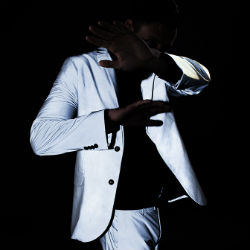 There are some new togs in the anti-surveillance fashion line, designed to send paparazzi’s camera flashes right back at them with identity-obscuring glass nanospheres that coat the fabric.

The clothing line – called the Flashback collection – comprises a suit, hoody, scarf and hat that, in the words of online clothing company Betabrand, turn you into a “thermonuclear photobomber!”

The cloth sends flash camera exposures into a tizzy, overexposing the brilliantly light-bouncing fabric and underexposing humans wearing the outfits, turning them into what Wired evocatively describes as “invisible, ghostly silhouettes.”

You’ll likely be familiar with the effect, given that the nanosphere technology is used in the reflective stripes on running vests and other safety garb.

Here’s what that looks like in the company’s men’s suit: 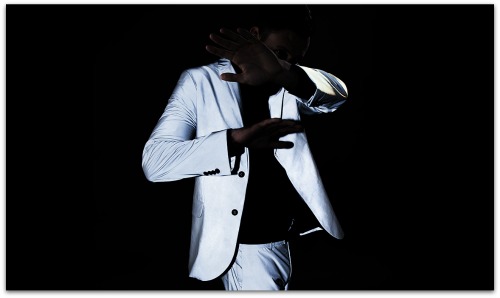 Chris Holmes, a DJ, got the idea for the clothing while touring with paparazzi-bait Sir Paul McCartney.

He noticed that after wearing reflective clothing to several performances, photos from those shows always looked odd, because the flash that bounced off McCartney’s clothing would obscure most everything else.

The photos were ruined, but it occurred to him that the effect could serve a greater good: namely, making paparazzi and other unwanted photos worthless.

Anything that can make people think twice about documenting everything with their camera, and putting down their camera and existing in the moment, is a good thing.

Will wearing these clothes shield your identity?

Only if surveillance or paparazzi have to rely on flash photography.

Otherwise, you’ll be quite identifiable in your drab gray clothes, as you can see in this before flash/after flash photo: 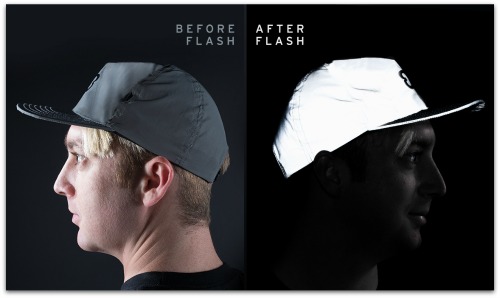 Still, it would make a stunning anti-surveillance statement were we all to don Flashback clothing, use makeup and hair styles to baffle facial recognition technology a la CV Dazzle, and maybe throw in a creepy T-shirt printed with faces that’s designed to confuse Facebook facial recognition.

One problem with the approach: this stuff is pricey! The Flashback men’s jacket alone costs about $400 (£263).

For that much money, I don’t want to simply blind paparazzi with my nanospheres.

I want my nanospheres to launch themselves at and disable surveillance cameras, then file legislation to curb warrantless surveillance.

For sentient, ambulatory attack nanospheres, yes, I would happily pay $400.