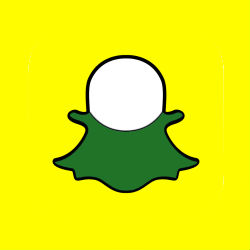 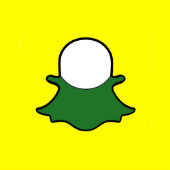 Ahh, Valentine’s Day: the day of romance, filled as it is with roses, chocolate, and college kids sneaking into football stadiums to have sex and chronicle it on Snapchat.

Like any Snapchat image that’s timed to disappear within seconds but does not, the image of the young woman in the story above, sans pants, was probably screenshotted before it was posted to a Snapchat account called “Volnationsnaps” and then onto Instagram.

Really, it was just another day for the Snapchat app, where non-disappearing snaps are old hat.

But this time (at least in theory), those kids should have known better, given that Snapchat had launched the Snapchat Safety Center just a few days earlier.

It’s essentially aimed at parents and teachers of its users, rather than at the users themselves.

In fact, the Safety Center contains a six-page Parents’ Guide to Snapchat that walks worried adults through what the app is, why kids love it, what the minimum age is to use it (13), and what the risks are in using it.

The risks are, of course, that somebody will Snapchat your a**, that snap will be saved by a recipient, and the content will go viral on one of a plethora of venues dedicated to memorialising noteworthy snaps, such as the one taken at the football stadium.

From Snapchat’s inception, it was obvious that content could be captured before it disappeared, whether via screenshots, taking a photo of the content with a separate camera, or simply because images that are supposed to disappear forever stay on our mobile phones and on Snapchat’s servers.

Snapchat knows this. To its credit, it’s upfront about it on the new Safety Center.

From the Parents’ Guide:

The ephemeral aspect ... adds a degree of safety, as long as people don't have a false sense of security about it. Images can be saved as screenshots or captured with another phone and shared without the originator's knowledge.

If your Snap gets captured by someone you send it to, Snapchat notifies you, but people have found workarounds for that too. So, as always with digital media, 100% safe sharing doesn't exist.

In this image, the fifth message shows what that notification of a captured screenshot is supposed to look like: 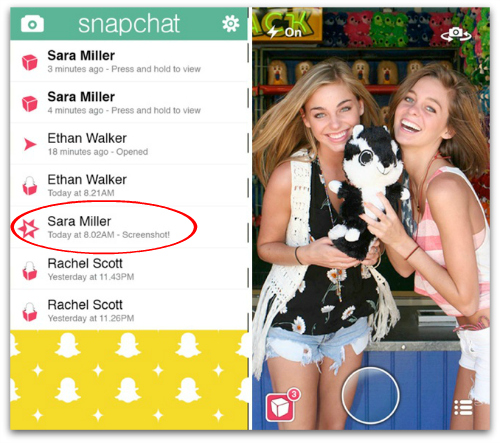 As Snapchat notes, there have been workarounds to evade notification, such as the one that cropped up when screenshot behaviour in iOS 7 was changed.

Snapchat sure didn’t seem adverse to having its promise of ephemeral content be used by young bodies swapping nude photos, at least in its early days.

As Fusion’s Kashmir Hill points out, the mobile app blatantly pushed its potential for sexting, initially fronting itself with an image of two young girls with a timer placed where their clothes would be.

The community guidelines, along with its stress on not snapping nudies if you’re a minor, aren’t new.

They date to October 2013, appearing six months after nude photos of teen girls at a New Jersey high school were sent through Snapchat and Instagram and then posted by a male recipient.

I doubt that the Safety Center’s emphasis on the guidelines will have much effect on Snapchat users.

Research has shown that sexting and other potentially reputation-damaging content is only exchanged in a small percentage of shared Snapchat content.

But, in spite of a majority (79.4%) of respondents knowing that recovering snaps is possible, a little more than half simply don’t care.

In fact, 52.8% of respondents said that learning about insecure message destruction wouldn’t change their use of the application at all.

But even if user behaviour isn’t likely to change, there’s nothing wrong with trying to inform parents of what dangers their kids are facing with Snapchat.

The new Safety Center is of course a marketing piece as much as anything. But it’s also honest about the risks.

Savvy parents can look beyond the Safety Center’s cheerful graphics, with Snapchat’s happy little cartoon ghosts, playing in their flower-filled playground, and clearly see: this isn’t all jump-rope and picnics.

There be vipers and dragons in these hills.