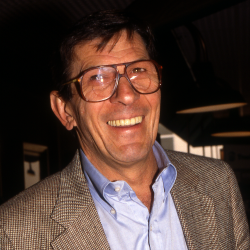 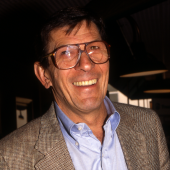 Leonard Nimoy was beloved by millions, including many of us at Naked Security and Sophos.

So it is with great sadness that we acknowledge his passing on Friday, at the age of 83, and offer this modest tribute.

Nimoy is of course best remembered as Mr. Spock, the half-human, half-Vulcan officer of the USS Enterprise in the 1960s TV series Star Trek, which inspired a cult following of Trekkies and spawned a franchise of movies, follow-on TV shows and countless imitations.

At Naked Security, our appreciation for all things Star Trek inspired us, back in 2009, to create a version of Sophos Anti-Virus translated into Klingon, a made-up language that legions of Trekkies have learned to speak.

Spock’s Vulcan nature, which eschews emotion in favor of reason, gave him the unique ability to hold up a mirror to our human frailties such as ego and envy.

He would often say “it is not logical” to counter the valiant captain of the Enterprise, James T. Kirk, who frequently led with his gut (and his lust) and not with his head.

“May I say that I have not thoroughly enjoyed serving with humans? I find their illogic and foolish emotions a constant irritant,” Spock lamented in the 1968 episode “Day of the Dove.”

Nevertheless, Nimoy, through his character Spock, did teach us about love.

In Episode 24 of the original Star Trek series, Spock is transformed by contact with “aphrodisiacal spores” and falls in love with a human woman, only to lose her when the effects of the spores wore off.

As described by the New York Times, Nimoy “brought to Spock’s metamorphosis not only warmth, compassion and playfulness, but also a rarefied concept of alienation.”

The news of Nimoy’s death rippled across social media on Friday, with many tributes coming from famous actors and politicians.

President Barack Obama, who has often been compared to Spock for his perceived cool detachment, released a statement in which he said “I loved Spock.”

The novelist Gary Shteyngart had one of the best farewells, tweeting:

Nimoy was fond of Twitter, and his tweets showcased his humor, pithy thoughts and tidbits of poetry he shared with his more than 1 million followers (including me).

He always signed his tweets with “LLAP,” short for “Live long and prosper,” a signature Spock saying.

Nimoy shared with us his love for science and the arts (he was not just an actor, but also a photographer and a poet).

Nimoy, like his character on Star Trek, came to represent science and logic to an entire generation who not only enjoyed his character, but his narration of science documentaries and other science programs. His calm demeanour and true dedication to science will be sorely missed.

Another fellow Naked Security writer, John Hawes, recollected how he once “stood under what I was told was his balcony for half an hour in the hopes he might pop out.”

Personally, I was a big fan of Star Trek, but certainly not the biggest.

I remember watching re-runs of the old TV series as a kid with my father, a true Trekkie, and I have seen all of the feature films.

But I think I was most impressed by Nimoy’s voice, which played a small part in encouraging my love of science, nature and the universe.

Growing up in the Boston suburbs, I took frequent trips to the Boston Museum of Science.

The museum’s planetarium, which I haven’t visited in many years, always began its programs with an unusual sound test that featured Nimoy’s booming baritone saying “Who put the bomp, in the bomp-sha-bomp-sha-bomp.”

He grew up “three blocks from here,” the voice said, in reference to Nimoy’s Boston roots.

Now, Nimoy is gone – off into what is truly the final frontier.

We loved him, and we loved Spock, no matter how illogical that may be.

5 comments on “RIP Leonard Nimoy: a hero to Trekkies, but so much more than “Spock””