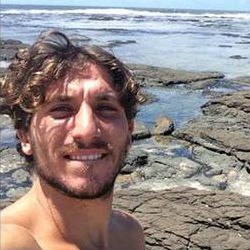 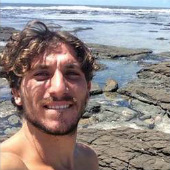 A woman and her iPhone have been happily reunited, thanks to the new owner having accidentally posted a selfie onto her Facebook page that went viral.

Nicola Shelton, 33, of Melbourne, had her bag stolen – credit cards, wallet, iPhone and all – while she was on holiday with friends at Byron Bay in New South Wales on Valentine’s Day.

Well, she thought, she can just kiss that phone goodbye.

But last week, she got a clue sent from that same phone: specifically, a photo of a man taken near to where her bag and phone had been snatched almost two weeks before.

Ms. Shelton’s boyfriend first noticed the photo, which had been posted to her Facebook wall, and alerted her to it.

According to 9 News, this is what she wrote:

So this is the low life that stole my bag/iPhone and has decided to take a photo with my phone and post it on my Facebook!! Scum! Bag stolen in Byron bay on February 14, please share to everyone!!!

She was shocked when the post went viral, being shared nearly 20,000 times by strangers.

The Daily Mail Australia quotes her:

I was absolutely dumbfounded. At first when I re-shared [the] photo I didn't think anything would come from it.

People were messaging me and wishing me luck, people I didn't know, it was bizarre.

But after the post picked up traction, the man in the photo reached out to Ms. Shelton, via Facebook, to apologise and tell her that he’d bought her phone off a third party, not realising it had been nicked.

She later changed the caption on her repost to read:

This is the person who has my iPhone

The selfie poster later handed the phone over to Byron Bay police, who then returned it to its rightful owner.

This isn’t the first time that phone finders, thieves or crooks have helped police out by posting selfies.

An HTC phone that disappeared out of a student’s pocket in May 2014 snapped a selfie of the mystery man (thief? Phone finder? Who knows!) who entered the wrong PIN.

Then there was the time that a woman lost her iPhone back in December 2012 and then got an email with a selfie of the woman who tried to unlock it.

A phone that emails its owner when people enter the wrong PIN is one way to try to recover a lost or stolen phone, but there are plenty more means to address mobile theft.

In the US, a mandatory kill switch bill that requires phones sold in the state of California to come with the ability to be bricked when stolen was signed into law in August 2014.

Naked Security has loads more tips on how to protect your data, for free.

Sophos also offers a free Android Mobile Security app, which tracks down a device, offers remote wipe, plus sends the phone’s last location before the battery runs out.

It also comes with a slew of other security goodies, like protection against Android malware.