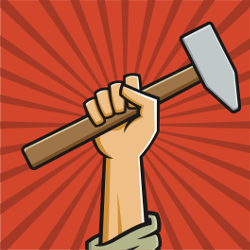 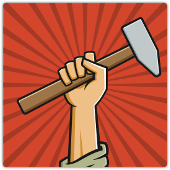 There’s yet another new groovy exploit name on the “this is an interesting security problem” block.

We’ve had already had bugs with names like Heartbleed, POODLE, Shellshock and FREAK; here comes rowhammering.

The name row hammer is reasonably new, and seems to originate with a range of Intel patent applications filed in 2012.

The problem stems from the way Dynamic Random Access Memory (DRAM, or what we usually just call RAM for short) works.

It’s hard to explain row hammering without getting bogged down in detail, but what matters is that data in DRAM chips is stored as an electrical charge in rows (and rows, and rows) of tiny capacitors.

A DRAM chip might have, say, 256K rows of 64K capacitors, each storing one bit, for a total capacity of 16Gbits, or 2GB.

For performance reasons, you can’t read an individual bit out of DRAM, but you can energise an entire row of capacitors at the same time, and read out all their values.

The thing is, when you read out a row of bits, they discharge, thus losing their values; so once you read them, you need to write that data back immediately by recharging the capacitors in the row.

So a DRAM read cycle is actually implemented in hardware as a read-and-refresh cycle.

As it happens, DRAM capacitors discharge steadily of their own accord, whether you read them or not.

So the DRAM hardware does a read-and-refresh on every row automatically anyway, on a regular basis, in order to keep the memory topped up.

That’s why it’s known as “dynamic RAM” rather than “static.”

But DRAM specifications insist that storage bits must retain their value correctly, without being refreshed, for at least 64 milliseconds, which is ages by computer-clock standards.

So, if you explicitly read a memory address over and over again, you can force much more frequent reading-and-recharging of a row. (Remember, you can’t read without immediately refreshing the memory contents.)

Remember how, if you didn’t listen to a tape for a while, your favourite tapes generated “echoes“?

In the quiet bits between tracks, you’d hear a ghostly echo or two of the end of the song before; the echoes would be spaced apart by the time it took for the reel to rotate once at that point in the tape.

The reason was that the magnetism from one coil of the tape would influence the magnetic coating of the tape pressed up against it, one tape-thickness away. (That’s why longer cassettes, which used thinner tape, were more likely to have echoes.)

You wouldn’t get a perfect copy, but you would get bleed-through, causing audible corruption.

It turns out that the same sort of one-guy-affects-his-neighbour problem applies to DRAM, too.

And, in the same way that high-capacity C120 (two-hour) casette tapes corrupted faster than their C60 (one hour) counterparts, the problem gets worse as the capacitors in DRAM are squeezed ever closer to increase memory storage sizes.

In other words, by repeatedly and frequently reading from the same memory address, and thus triggering a read-and-refresh of the same row in DRAM, you may inadvertently introduce flipped bits – data corruption – in close-by capacitors in neighbouring DRAM rows.

Saved by the cache

In normal programming, DRAM read-and-refresh is limited by caching, which is where memory data you accessed recently is temporarily held in storage that’s even faster than DRAM, to save time if you need the same data again soon, which you often do.

So reading the same byte over and over doesn’t usually cause “row hammering,” and thus bleed-through is avoided.

But, as researchers at Carnegie Mellon University (CMU) wrote in 2014, a malicious programmer can deliberately sidestep the cache by repeatedly using a handy machine code instruction called CLFLUSH, which stands for Cache Line Flush.

CLFLUSH makes the processor forget that it already knows what’s in DRAM address X, so that your next access to X really does read from DRAM, and thus triggers a read-and-refresh.

So you can deliberately hammer a row, and as the CMU researchers found, provoke DRAM bit errors in surprising quantity. 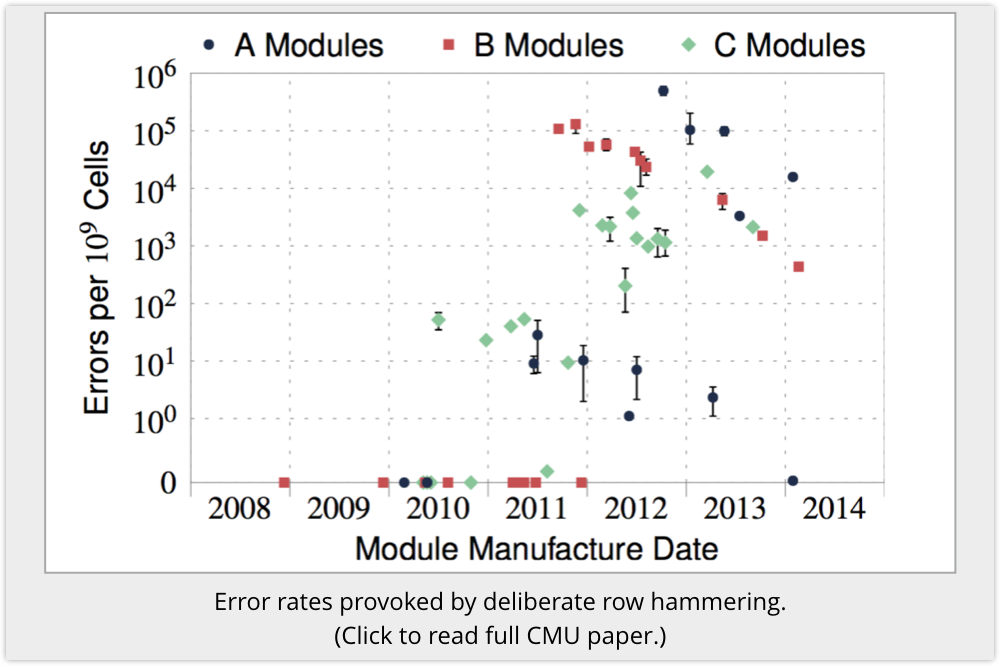 In the CMU paper, with millions of repeated reads at carefully-chosen intervals, the researchers observed induced error rates as high as 100,000 incorrect bits per gigabit.

In other words, instead of simply corrupting data and causing a program to crash or to produce dud results, could you predictably make a program or an operating system misbehave through unpredictable random changes in unpredictable memory locations?

To cut a long story short, the answer turned out to be a qualified “Yes.”

One method involved deliberately targeting the memory cells where the operating system was storing its page tables, which is the map of which memory belongs to what process.

With careful advance preparation, the researchers found that it was indeed sometimes possible to trick the operating system into mapping in their own, malicious memory content instead of what was supposed to be there.

The details are rather complicated, but the overall result is that even a modest number of random-seeming changes in DRAM, if orchestrated cleverly, can produce very non-random failures.

In particular, the Googlers figured out how to redirect the CPU to run code from the wrong memory addresses, by shaking up the operating system’s map of which memory went where.

In other words, they didn’t need to hammer the DRAM so that it suffered a specific and predictable sequence of errors, and thus to write out malicious code bit-by-bit.

They just needed to hammer it so that it caused the operating system to look in the wrong place, and by guessing where those wrong addresses might be, they could fill lots of candidate locations in advance (a trick known as spraying) with the malicious code they hoped to run.

The saving grace here is that the Googlers relied on a very lightly loaded computer, meaning that they were able to hammer more predictably and aggressively than on a computer where their hammering code was just one of many processes competing for the CPU’s attention.

Also, apparently, speeding up the rate at which the routine DRAM refresh happens (the automatic “read for the purpose of refreshing the capacitors” operation that DRAM must perform regularly in order to work at all) will significantly reduce the row hammering effect.

So for most of us, this research almost certainly doesn’t represent a clear and present danger.

But if you’re a DRAM designer, this is a clear future danger that needs addressing: perhaps minimum refresh rates should be increased to reduce the effectiveness of row hammering?

Similarly for CPU designers: for example, perhaps it’s time to make CLFLUSH into a privileged instruction to limit a crook’s ability to perform deliberate row hammering?