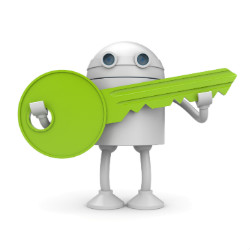 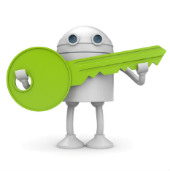 Google must be taking pity on index fingers fatigued with all that Android unlocking.

According to Android Police tipsters, Google’s rolling out a new feature called on-body detection that uses a device’s accelerometer to determine if it’s still in your hand, purse or pocket and to lock up the mobile when it’s not.

That should foil busybodies or thieves who pick up a phone that’s been left on a table or that’s flopped out of a pocket, the thinking goes.

Here is one of the screenshots Android Police readers shared: 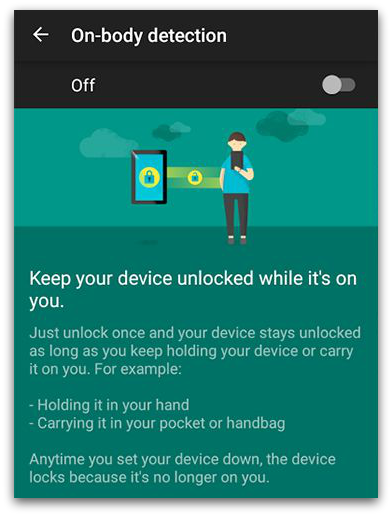 As the image explains, on-body detection will disable the lock screen until you place your phone down.

When you first pick it up in the morning or after setting it down, you’ll need to unlock it, but after that, it will pick up on movement and remain unlocked and ready to go when you next need it, assuming you’re not using another trusted authenticator factor.

Or, at any rate, it will be ready to go for you, or for somebody to whom you handed it after unlocking it, or for a pickpocket, or, say, a zombie.

Anybody, in short, who keeps the accelerometer happily jiggling away will be able to get at your data, according to Google’s caveat:

If you unlock your device and hand it to someone else, your device also stays unlocked as long as the other person continues to hold or carry it.

In other words, the accelerometer isn’t sniffing your pheromones to find out whether it’s you or somebody else snuggling up to it. Any movement is “keep me unlocked” movement.

It was first spotted on a Nexus 4 still running Android 5.0.1, but Android Police’s David Ruddock reports that it has now been seen on many devices, including most Nexuses.

He also says that the publication’s tipster is running the most recent version of Play Services and that the news outlet has determined that trusted places is enabled by Google Play Services, so “it seems likely this on-body detection mode is probably activated similarly, and isn’t part of the core OS.”

Android Police says not to worry if you’re not seeing it yet.

It’s seen multiple confirmations, so on-body detection looks like a real thing, albeit one that Google’s unveiling gradually.