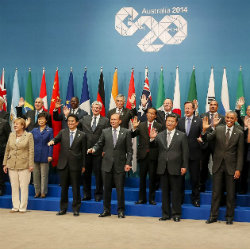 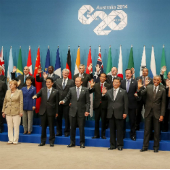 World leaders’ personal details, including data about passports and visa status, were accidentally revealed by the organisers of the latest G20 summit, The Guardian has revealed.

Those leaders – including Barack Obama, Vladimir Putin, Tony Abbott, Angela Merkel, David Cameron, Narendra Modi and others – were supposedly kept in the dark about the data breach because it was felt it wasn’t necessary to inform them.

On 7 November 2014, the director of the visa services division of Australia’s Department of Immigration and Border Protection sent an email seeking urgent advice from the Australian privacy commissioner.

In that email, which The Guardian obtained under Australia’s freedom of information laws, the breach was blamed on an employee having emailed a member of the local organising committee of the Asian Cup and accidentally including the personal information.

The director blamed the glitch on an employee sending an email via Microsoft Outlook, which auto-filled the wrong address in the “To” field.

The cause of the breach was human error. [Redacted] failed to check that the autofill function in Microsoft Outlook had entered the correct person's details into the email 'To' field. This led to the email being sent to the wrong person.

The matter was brought to my attention directly by [redacted] immediately after receiving an email from [the recipient] informing them that they had sent the email to the wrong person.

The risk remains only to the extent of human error, but there was nothing systemic or institutional about the breach.

The letter asserts that the information likely didn’t enter the public domain, given that…

The fact that addresses or other contact information wasn’t included in the email “limits significantly the potential risk of this breach,” the director said.

The passport data, on the other hand, could be used “for unknown purposes” by the recipient, the director’s letter said, though it seems unlikely to happen.

The Asian Cup local organising committee do not believe the email to be accessible, recoverable or stored anywhere else in their systems.

The immigration officer closed with a recommendation that the world leaders needn’t be informed of the breach of their personal information:

Given that the risks of the breach are considered very low and the actions that have been taken to limit the further distribution of the email, I do not consider it necessary to notify the clients of the breach.

Whether or not it’s legal to avoid disclosing the breach depends on which country a given world leader calls home, given that they all have their own mandatory data breach notification laws.

The office of the Australian immigration minister, Peter Dutton, didn’t respond to The Guardian’s questions, and thus it’s unknown whether or not the immigration department informed the delegates of the breach in spite of the letter’s recommendation against it.

The timing of this revelation will likely embarrass the Australian government, which just last week passed mandatory data retention laws that require telecommunications and internet service providers to store customers’ metadata for at least two years.

Our advice for email users