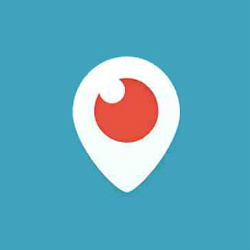 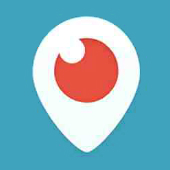 The glitch happens if a user forgets to turn off the Twitter button before broadcasting a private video stream, thereby meaning that the title gets shared with all the user’s followers.

Periscope allows users to broadcast live video and audio from their phones into their Twitter feeds.

Viewers tune in mid-stream and can submit comments or give a thumbs-up by pasting a heart onto what they’re viewing, both of which pop up in real time over the feed.

It’s apparently both pleasant and highly addictive, according to FastCompany’s Rose Pastore, in spite of the fact that it leaks location details (a feature that you can turn off, thankfully).

Location sharing is actually part of its allure, she says, particularly if you’re a journalist trying to find on-the-scene comments by location:

When I was reporting a story about the building explosion in Manhattan last week, for example, I was able to choose streams marked "New York" to find live video of the fire from people on the street. To view the map during a stream, you swipe right, and then pinch to zoom in or out.

The appeal is obvious, but it’s still reassuring that location sharing can be turned off.

Most videos, judging by their titles, are filmed in the home, and location sharing can give any viewer an instant geolocation of you and/or your children or whomever else you’re filming.

But the privacy glitch that concerns leaked titles, which emerged on Monday, is not only a threat to user privacy; it’s potentially very embarrassing, particularly for those in the habit of giving videos titles that they’d rather not have all their followers see. (Let your imagination run wild on that one.)

It’s not that audio or video of a private broadcast will be broadcast. It’s only the title that leaks.

As The Register ponders: Annoyance or catastrophe?

Well, that depends on who cares about the titles, and thereby, the subject matter, of your private videos. (Cue the divorce lawyers.) 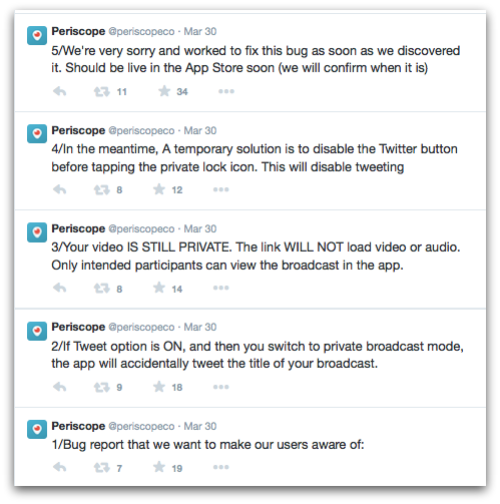 1/Bug report that we want to make our users aware of:

2/If Tweet option is ON, and then you switch to private broadcast mode, the app will accidentally tweet the title of your broadcast.

3/Your video IS STILL PRIVATE. The link WILL NOT load video or audio. Only intended participants can view the broadcast in the app.

4/In the meantime, A temporary solution is to disable the Twitter button before tapping the private lock icon. This will disable tweeting

5/We're very sorry and worked to fix this bug as soon as we discovered it. Should be live in the App Store soon (we will confirm when it is)

As one Twitter user noted, Periscope is only available on iOS, so iOS users are the only ones who have to use a workaround to share private videos with hair-raising titles.