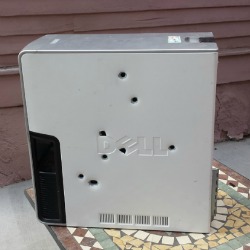 There are a variety of ways to deal with the Microsoft Windows Blue Screen of Death (BSoD): use System Restore to roll back to a previous state, install updated drivers, boot in safe mode, check for hardware problems, scan for malware, or reinstall Windows.

Then again, you could always buy a gun off Craigslist, take that *&^% box into the back alley, and blow it to kingdom come.

Unfortunately, this method, while likely being very satisfying, could get you arrested for discharging a firearm within city limits, as happened to a Colorado man who told police he was “fed up” after “fighting with his computer for the last several months”.

As The Smoking Gun reports, US police in the city of Colorado Springs on Monday responded to an emergency call about shots fired.

When they arrived, they found that Lucas Hinch, 38, had taken his computer into a back alley and executed it by “[firing] shots into the computer with a handgun, effectively disabling it.”

Effective, indeed, as can be seen in a police evidence photo of the victimised hardware: 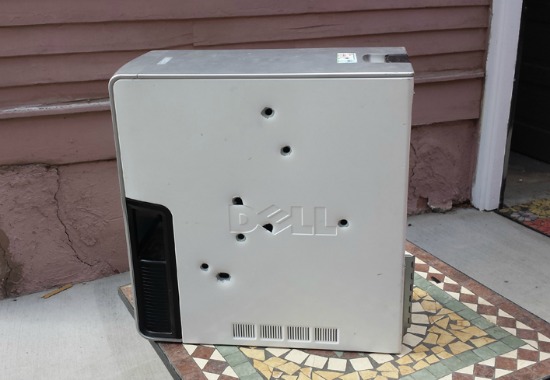 Hinch was reportedly cited for discharging a firearm within city limits, according to a police blotter entry bearing the summary description “Man Kills His Computer.”

Hinch told TSG that he had “just had it” after months of exposure to the recalcitrant computer’s BSoD.

The machine was put out of its misery with a 9mm Hi-Point pistol that Hinch had recently found on Craigslist.

Police seized the pistol, but they left the corpse.

Hinch is the operator of a homeopathic herb store he runs out of the home he shares with his girlfriend and formerly with his computer.

Hinch administered lead slugs to the computer in the alley in back of this homeopathy store.

He’s scheduled for a May 11 court hearing on the misdemeanor charge.

Leave a Reply to steve B Cancel reply