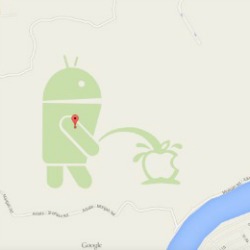 As of Monday, all was well in Pakistan’s Ayub National Park, at least as far as Google Maps was concerned, which was showing it as a verdant green swath of pixels.

It was a nice change from the image of Google’s Android icon peeing on an Apple logo: an image that a map prankster uploaded to Google Maps and which had stayed up for an undetermined time.

The paper quoted the statement from Google’s Mara Harris:

We're sorry for this inappropriate user-created content; we're working to remove it quickly. We also learn from these issues, and we're constantly improving how we detect, prevent and handle bad edits.

There’s the vast majority, and then there’s “nitricboy“, whose user profile page on Map Maker shows that he made the edits to Google Maps last week.

Contributors to a Hacker News thread on nitricboy point to his other stunts, including a giant smiley face drawn onto Islamabad, as well as a Skype logo that apparently no longer appears on Google Maps.

The bladder-voiding Android image was submitted as a park, located on the outskirts of Rawalpindi, a Pakistani city 10 miles southwest of Islamabad.

Such jokey edits are submitted via Google’s Map Maker: a service the company introduced in 2008 that lets users worldwide upload new data to the company’s online mapping service.

Contributions from new users are moderated by more experienced users, or Google reviewers, to ensure quality and prevent vandalism such as the peeing bot or the giant cat that sprawled over Auckland’s Hobson Bay Walkway in October.

But while crowdsourcing opens up map making to any and all comers, it’s also prone to being abused by users who, according to Tech Crunch, create additional accounts in order to “approve” their own adolescent edits.

Map Maker isn’t the only way to screw around with Google Maps.

Earlier this month, somebody set up a joke business on the maps service. It was purportedly a snowboarding shop called “Edwards Snow Den,” located at 1600 Pennsylvania Avenue – an address otherwise known as the White House.

It’s since been wiped away, but the Washington Post reported that the Google Plus listing for the shop posted hours – open daily from 5 am until 11 pm – and a Washington state phone number that was leading to a busy signal.

Those pranks aren’t hard to pull.

Because Google relies so heavily on user-submitted content, it’s easy to make a listing for “Edwards Snow Den” at a different address and then submit an address change for 1600 Pennsylvania Avenue.

Or, for that matter, a listing for “freddy fazbear pizza”, which was located within the building that houses the US Department of the Treasury. (It no longer appears there as of Monday).

As the newspaper notes, this was apparently an allusion to the Freddy Fazbear horror video game: one in which the animatronic, homicidal bear roams a pizza parlor after hours, murderously stuffing humans into a Freddy Fazbear suit.

Google said last week that it is – as always – trying to figure out how to handle the complex issue of spam, including tweaking its systems to improve how they prevent, detect and take down incorrect edits.