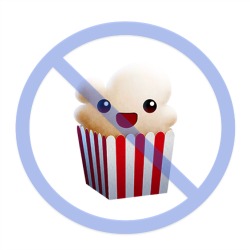 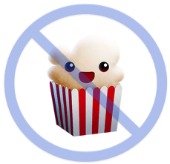 The UK High Court has ordered internet service providers (ISPs) to block Popcorn Time, a piracy app that’s as easy to use as Netflix.

This is just the latest in a series of blocking orders issued by the High Court.

At this point, UK ISPs have to block more than 100 piracy-related sites, including many of the world’s largest torrent sites and streaming portals.

But according to TorrentFreak, this is the first ever injunction against domains that offer only software, as opposed to hosting direct links to copyright-infringing content.

Popcorn Time’s developers have shrugged at the legal posturing, pointing to the fact that they’re just providing an easy-to-use interface for the pirated content that’s already out there.

As an anonymous spokesperson for the developers said last month, an upcoming switch to a peer-to-peer (p2p) architecture will make the service near invincible:

Making all our data available via p2p will mean that Popcorn Time will no longer rely on domains and centralized servers but only on its user base. After everything we went through, this will be our sweetest revenge and our biggest victory.

That means the UK’s blocking order is doomed, they said in a statement sent to The Next Web:

We're pretty disappointed from the judicial system in the UK and feel pretty sorry for the citizens of England for their basic rights, like the freedom of speech and net neutrality being revoked so easily.

We hope to see some sort of protest from the citizens of the UK against this order, but given how easy it is for the judicial system there to hurt their basic rights, we doubt they will do so.

We find this move they made pretty predictable and we're sure that this is not the last of it. We're working full force now even more than ever on making Popcorn Time fully p2p and soon the software will not be depended on any domain or centralized server to operate.

But even an invincible architecture won’t protect Popcorn Time’s developers from the long arm of copyright holders, their lawsuits or even criminal charges.

Case in point: the Pirate Bay.

The last of the Swedish founders was arrested in November, with each of the other original Pirate Bay gang having been convicted earlier and sentenced to a year in prison as well as a collective fine of 30 million Swedish kronor.

The US has for years been trying to extradite Megaupload founder Kim Dotcom from New Zealand to face criminal charges of racketeering, money laundering and copyright theft, as well.

So while pirates are working to perfect the machinations behind this whack-a-mole game, the copyright holders don’t seem at all fatigued when it comes to persistent, ocean-spanning whacking.