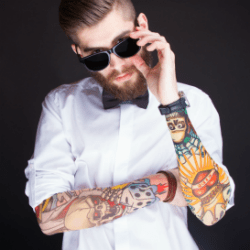 Apple has stepped up to the tattoo-gate fray, confirming that some wrist tattoos can block its Watch from measuring heart rates:

Permanent or temporary changes to your skin, such as some tattoos, can ... impact heart rate sensor performance. The ink, pattern, and saturation of some tattoos can block light from the sensor, making it difficult to get reliable readings.

Dark inks, such as red, blue and black, are reportedly more prone to obscuring heart rate readings, given how colors play into the device’s sensor system.

Here’s Apple’s description of what photoplethysmography (say THAT 10 times fast!) is and how Watch uses it:

This technology, while difficult to pronounce, is based on a very simple fact: Blood is red because it reflects red light and absorbs green light. Apple Watch uses green LED lights paired with light‑sensitive photodiodes to detect the amount of blood flowing through your wrist at any given moment. When your heart beats, the blood flow in your wrist — and the green light absorption — is greater. Between beats, it's less. By flashing its LED lights hundreds of times per second, Apple Watch can calculate the number of times the heart beats each minute — your heart rate.

That is, it can run those calculations only sometimes, even under ideal conditions, which can be compromised by things such as how much blood flows through a wearer’s skin, whether it’s cold outside (which hampers blood flow), and whether there’s an impenetrable wall of darkly inked tattoo staring it down. 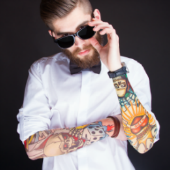 TechCrunch surmises that Apple learned about the glitch after the product launch, when users started to note the issue and post videos about it.

That’s supported by the Wayback Machine, which shows that Apple’s page only picked up the tattoo explanation after 11 April.

While the issue doesn’t appear to have security implications, it does have annoyance implications.

If the heart rate sensor can’t detect a user’s pulse, and if the watch can’t detect direct contact with the skin, it could cause apps, including Apple Pay, to stop working and to repeatedly ask for passcodes.

Apple Watch’s sensors are supposed to be able to tell if someone is wearing the device.

But fortunately, Apple’s set it up such that if it doesn’t think anybody’s wearing the Watch, because of tattoo sleeves or what have you, Watch will prompt for a passcode.

Even if you lose Apple Watch, your accounts are protected. Because when you set up Apple Pay, you're required to create a passcode. Each time you take Apple Watch off your wrist, the passcode must be entered to access it. And you can quickly remove your cards on iCloud.com.

Whether or not dark skin causes the Watch to malfunction seems to be up in the air. Apple didn’t mention melanin as being an inhibiting factor for the sensors, but there’s been some conjecture on whether what’s considered the Watch’s coolest feature will work for people of color.

I asked Apple for some input on the pigmentation question, as well as whether the tattoo issue might impact any security features of Watch.

If anyone gets back to me, I’ll update the story.

In the meantime, to our sleeved brothers and sisters who’ve already shelled out for a tattoo-unfriendly wrist computer: our sympathies!

Hopefully Apple will get this figured out for the next iteration, and hopefully that won’t involve cranking the light output to the point of frying any wrists!