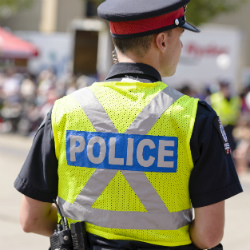 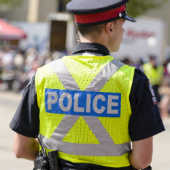 But as of Monday, after a unanimous council vote, the already controversial bylaw was extended to include insults posted online.

Robert Riel, deputy mayor of the town, which lies 80 kilometres east of Montreal, said that online threats are no different from threats made to people’s faces:

In my opinion, if I threaten you via my keyboard, it's as though I am making that threat right in front of you. ... For me, it's the same thing.

CBC News ties the criminalisation of online attacks to the police having recently discovered a Facebook page dedicated to commentary on the town’s police force.

The page is titled Les policiers zélé de Granby, which translates to “the zealous police of Granby.”

The most recent post, from 25 April, sure seems to fall short of being “threatening”, particularly by internet troll standards (translated):

We will start to defend citizens, if the mayor continues with laws favoring censorship and intrusion on private life ... The ball is in his court. To be continued.

Another sample comment on the post that does, in fact, fall under the category of “insulting”, in a playground nyah-nyah way (all sic):

Sorry I do not speak or write french..but I seen this article...what a load of crap..you cops in that town can kiss my azz....if you don't like it..well..you could not read it or not watch or listen, otherwise, suck it up buttercup. ... here is something to help you out... [Link to "Hurt Feelings" report forms]

Not surprisingly, the bylaw has been interpreted as an attack on freedom of speech.

What you're going to be having is a trial of speech every time a municipal employee or a policemen considers himself insulted. I think this is absolutely terrible.

I don't think it'll stand up — I hope it doesn't stand up — to judicial review. I hope it gets struck as soon as someone is charged under it.

It’s assuredly hard to be in the public eye, subject to slings and arrows and the written equivalent of rotten fruit.

And police do have to take potentially real threats seriously.

One example: last week, a Yik Yak message alluding to the date of a mass murder led to the arrest of the person who posted it.

But in these digital times, a police force must acknowledge that citizens videotape or otherwise record police interactions and comment about public servants’ performance or behaviour online.

In the US, that’s constitutionally protected activity.

Sometimes police have to be reminded of that.

In Granby, Quebec, it sounds like the city council needs to be reminded that the answer to “Who’s watching the watchers?” is, in this day and age, “Everybody.”