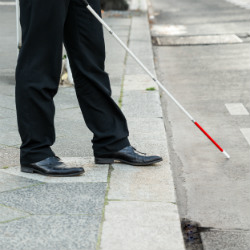 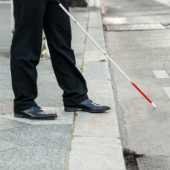 Students at Birmingham City University in the UK have created a cane that recognises familiar faces and vibrates to let its blind owner know that they’re near people they know.

Phys.org reports that the “XploR” cane uses mobile phone technology and facial recognition to recognise familiar faces from up to 10 metres (11 yards) away.

The cane, developed by students Steve Adigbo, Waheed Rafiq and Richard Howlett, vibrates when it detects a recognisable person from a bank of images stored on an internal SD memory card.

The cane also relies on GPS for navigation.

Using an ear piece and audio output, it uses info relayed through Bluetooth technology to guide users toward known individuals.

At Naked Security, we tend to write about facial recognition technology being used to keep an eye on people. In the Snowden Era, we seem to write about that a LOT.

Meanwhile, recent advances in facial recognition technology suggest that computers may soon be able to spot faces even if they’re tilted or partially blocked: a boon not only to cloud storage providers and social networks who are building massive, privately held facial recognition databases, but also to surveillance agencies.

How refreshing, then, to be able to write about facial recognition technology being used to assist one of the most vulnerable sectors of the population: the blind.

There have been multiple technologies used to protect another vulnerable demographic, the elderly, from phone scams, including the use of old-school landline phones to flag “it’s me” scammers, as well as phone scam detection technology designed to recognise a phone scammer by combining voice intonation analysis with keyword recognition.

Kudos to the students for similarly using technology to steer blind people toward safety.

Image of blind man with cane courtesy of Shutterstock.