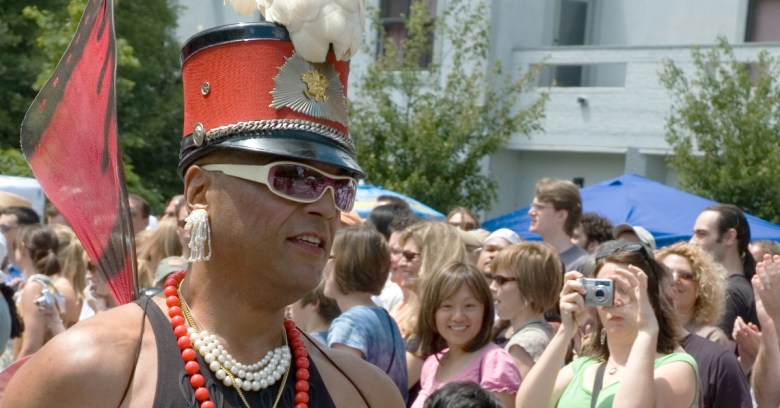 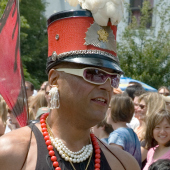 A street performer in the US who alleges that police forced him to post a positive Facebook post about how they treated him during an arrest will receive $20,000 (£12,775) to settle a lawsuit he filed over the incident.

Here’s how the street performer, who goes by the name of Baton Bob, got busted, was allegedly forced to hand over his Facebook login, and had to watch as cops allegedly typed in a self-aggrandizing message to his followers.

On 26 June 2013, the US Supreme Court ended the federal ban on same-sex marriage.

On that day, Baton Bob, self-appointed Ambassador of Mirth, celebrated the ruling by doing what he’s famous for: he put on a wedding dress, grabbed his baton, and headed to Midtown Atlanta to entertain the crowd.

Not for the first time in his career, he was asked to leave, this time by several security guards.

The situation escalated. Bob, whose legal name is Bob Jamerson, allegedly kicked somebody.

According to the lawsuit Jamerson subsequently filed against the city, Atlanta Police Department Officer H. J. Davis, who was working off-duty as a security officer, allegedly harassed Jamerson, who in turn “may have used an expletive.”

Ten minutes later, in the midst of his performance, Davis arrested the baton twirler, forcibly putting Jamerson’s hands behind his back, shoving him to the ground face-first, and allegedly handcuffing him without reading his Miranda rights – a right to silence warning given by police in the US to suspects in police custody before they’re interrogated.

Baton Bob was arrested and charged with assault and obstruction of justice.

Police at the time told the Atlanta Journal-Constitution that Jamerson was apologetic and cooperated with officers while they took him to the Fulton County jail.

In fact, he supposedly told his Facebook followers that the Atlanta police officer who dealt with him was “very respectful and gracious to me even in handcuffs.”

Those words were actually not written by Jamerson, according to his federal lawsuit, which he filed in February and which Creative Loafing Atlanta has posted.

Those words were allegedly written and posted by the police while he was in custody, as a condition to be released on a “signature bond.”

First of all, the atl police officer that responded to the incident thru security has been very respectful and gracious to me even in handcuffs. So, the situation escalated from a complaint from a security officer in the area and for some reason she rolled up on me like she didn't know who I was and like I had not been there before. For them to call police to come to intervene was not necessary. So, out of it, because of my fury, the Atlanta police officer did not understand the elements of the situation, so he was trying to do his job, respectfully and arrested my ass!!!!!!!!! I'll be out tomorrow so look out for my show at 14th and Peachtree. So now I'm waiting to be transported so I can sign my own bond and get the hell out of here. I want to verify, that the Atlanta police was respectful to me considering the circumstances. See you when I see you!!!!!!!!!!!!!! 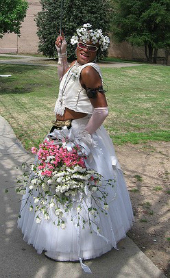 According to the lawsuit, the “say something positive about us on Facebook” idea had blossomed after bystanders and the media started asking why Baton Bob had been arrested and after a photo of the arresting officer, Davis, had been published.

Public Affairs had already let it be known that the department was getting a lot of calls. Lt. Cantin had in return written an email to Public Affairs, imploring them to “work your media magic with this case,” according to court papers.

Jamerson was freed the day after the allegedly doctored post went up, and charges were subsequently dropped.

Internal affairs conducted a six-month investigation into the incident.

In December 2013, Cantin received a five-day suspension for “violating responsibilities of a supervisor” and accepted responsibility, saying he was “just trying to do what was best for the department.”

Officer Davis was suspended for one day for not following arrest procedures and resigned during the same month that internal affairs conducted its investigation.

The charges against Jamerson were dropped in December 2014.

The Atlanta Journal-Constitution reports that the $20,000 settlement was approved during a meeting last week, on Tuesday afternoon, and will soon head to the full city council for final approval.

The resolution stated that it would potentially cost the city more to fight and lose than to just pay up, the newspaper said.

But in Jamerson’s case, if the police really did what Baton Bob says they did, they weren’t trying to capture a suspect, and they weren’t trying to reunite a citizen with her lost gadget (one of those public servant type of things for which police come in handy, although it’s not quite kosher to post to somebody’s account, even when their gadgets lack passcodes).

No, in the case of Baton Bob, it sounds like they were (allegedly) posting onto a man’s Facebook account simply in order to fend off negative media attention, in an attempt to make themselves look better.

Talk about a plan that backfired!