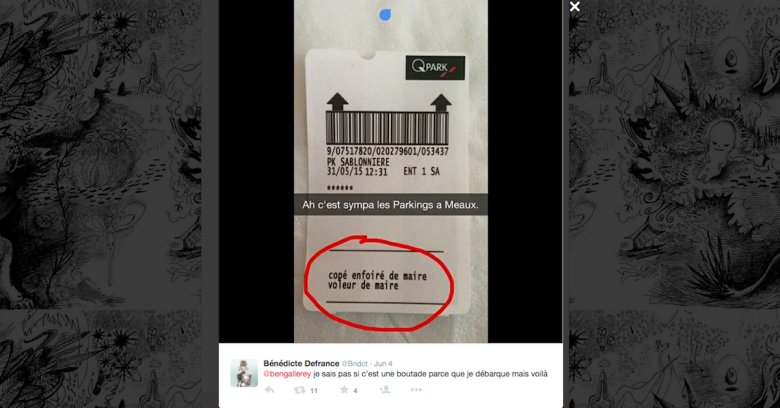 The parking ticket machines in the French town of Meaux, a town about 40km east-northeast of Paris, have staged a mini, machine-level French Revolution.

Taking aim at the town’s mayor, Jean-François Copé, otherwise normal-looking tickets issued to drivers from one particular parking lot were recently declaring that Copé was a “bastard mayor” and a “thieving mayor”.

According to Le Parisien, a payment terminal was found to have distributed more than 500 insulting tickets in May.

On them were these “courteous little messages”, as captured in this tweet:

As The Register details, Copé is a former bigwig of the French (conservative) opposition party Les Republican.

He declared himself president of the Union for a Popular Movement (UMP) Group in the French National Assembly in November 2012 (he wasn’t the only one: with Copé having received 50.03% of the votes, his opponent also declared victory).

But he resigned in May 2014 following lousy results for his party in the 2014 European elections and a scandal over invoices in which Le Point magazine accused Copé of using a friend’s company as contractor for organizing UMP’s events and overpaying it.

You can see where the parking machines get their inspiration.

The Mayor’s office, who filed a complaint, said that it received multiple complaints in a day from “shocked” Meaux citizens.

Police are looking into the matter.

The most likely culprit, Le Parisien reports, is an ex-employee of the parking company, Q Park, given that access to its computer system requires a username and password.

Not that that requirement rules out illegal access, given how feeble so many passwords are, of course.

Lise Botrel, communication director for Q Park France, says that it’s possible that the system was exploited by an outsider:

We might have been the victim of a hacker.

Or then again, maybe those machines really don’t like the mayor.

Do androids dream of electric sheep? We may never know.

But one thing we do know: either a) this parking lot’s security has been compromised by a cyber intruder, b) an anti-Copé ex-employee with an agenda has been abusing his access (which should have been revoked, of course!), or c) these machines take invoice tinkering really, really seriously.