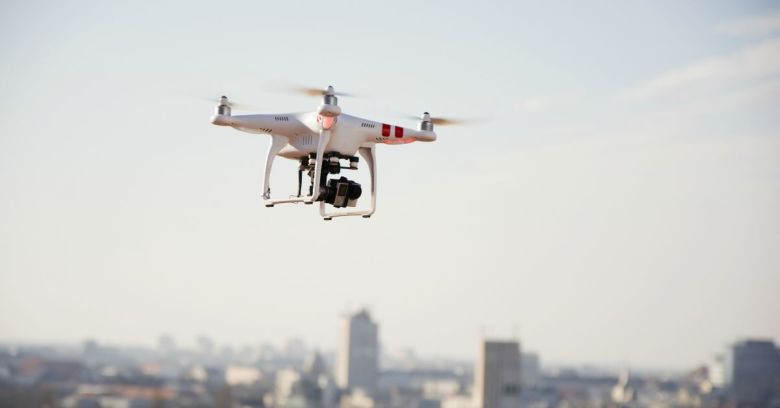 Drones: You can’t shoot them.

At least, you can’t legally shoot them, as was made abundantly clear when William Meredith recently got busted after murdering one with a shotgun and three blasts of Number 8 birdshot.

But how about this instead: you wrap your hands around one of those buzzing suckers – specifically, the gyroscope that helps the gadget sense changes in tilt, orientation and rotation, based on angular momentum – and you rattle the living daylights out of it.

Substitute resonant frequencies for rattling-by-hand, and you’ve got a method to knock down drones that researchers have described in a paper they plan to present next week at the USENIX Security Symposium in Washington, DC.

Resonant frequency is a natural property of all objects, including the crystal wine glasses that singers are famous for shattering when they hit the right tone at the right volume.

As demonstrated in this YouTube video of a slow-motion shatter, matching a tone to the same natural resonant frequency of the object you’re trying to affect and then amplifying that sound can cause it to shatter, in the case of a glass.

In the case of a gyroscope, you can get it to “spit out very strange outputs,” as researcher Yongdae Kim, a professor in the electrical engineering department of the Korea Advanced Institute of Science and Technology (KAIST), told ComputerWorld.

You would think that the gyroscopes used in unmanned aircraft systems (UAS) would have been designed to have resonant frequencies above the audible spectrum – i.e., above 20 kHz – but Kim and his team found that some have not.

Some drone gyroscopes have resonant frequencies in both the audible and ultrasonic frequency ranges, making them vulnerable to interference from intentional sound noise.

The researchers evaluated 15 types of gyroscope, all of which are readily available online. They found that seven are vulnerable to disruption using intentional sound noise.

They strapped a small, consumer-grade Bluetooth speaker with an audio amplifier to serve as an attacking sound source, putting it 10 cm above the top of the target gyroscope, and controlled its sound output wirelessly with a nearby laptop.

They managed to disrupt the flight of one of the two gyroscopes that had resonant frequencies in the audible range – Drone A, as they designated it – and sent it crashing in every test, as the researchers describe:

At 140 decibels, it would be possible to affect a vulnerable drone up from around 40 meters away, Kim said.

The team’s paper notes that the failure of the attack on the other vulnerable gyroscope had to do with the fact that it resonated only along the horizontal axis – an orientation that’s sensed not only by the gyroscope by also by the drone’s magnetometer, which measures the direction of the magnetic field at a point in space and hence serves as a backup for the drone to orient itself.

What are the chances of a real-world attack, if it necessitates strapping a speaker onto the drone you want to annihilate and of being within range to beam Wi-Fi signals at the speaker?

More tests are needed, the researchers wrote, but those tests might be hampered a bit by the fact that smashing a drone into the ground 20 times in a row is a bit rough on the equipment.

In fact, besides having to be recalibrated after each crash, the thing’s arms kept getting broken off.

They’ll continue to experiment, but other factors that make a real-world sound attack unlikely include the fact that it’s difficult to take aim at a drone with sound noise if you haven’t actually attached a sound source to it.

Plus, when you’re talking about attacks in the audible range, there’s the obvious problem of the attack not being particularly stealthy, given that you can hear it.

The researchers ask us to imagine drones with speakers that might be used by police or the military.

Of course, they’d have to use gyroscopes whose resonant frequency is different from that of the targeted gyroscope, lest the attacking police drones wind up becoming drone Kamikaze.

The scenario of police or other emergency responders using sonic attack drones brings to mind a worthy target: the hobby drones that have gotten in the way of firefighters in California recently.

Sonic attack presents a possible new way to disable such drones. That could come in handy if recently proposed legislation that would exonerate emergency responders for disabling drones manages to pass in California.

Another possible use could be to knock out drones that have been used to drop loads of contraband into prisons.

One such incident happened last week in an Ohio prison when a quadcopter came down in the prison yard, dropping a load of 144.5 grams of tobacco, 65.4 grams of marijuana, and 6.6 grams of heroin – a cornucopia that sparked a fight among nine inmates.

Another possible attack scenario: a sonic wall or a zone that radiates continuous sound noise (at various frequencies) in a specific area to enforce a no-fly zone.

That, in fact, is what the team built: an archway with speakers. The problem, ComputerWorld reports, is that the drone passed through too quickly for the attack to work.

ComputerWorld’s Jeremy Kirk notes that there are already sound-related devices on the market for both offensive and defensive purpose: one, the the LRAD Corporation’s 450XL, is billed as an “acoustic hailing device” that can be mounted on a vehicle or a tripod and can project a voice message up to 1,700 meters.

Image of drone courtesy of Shutterstock.com

7 comments on “Sound: Yet another way to smack down drones”