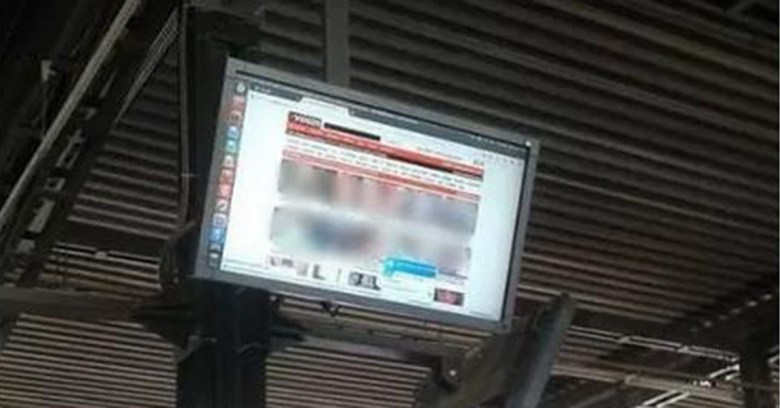 As one shocked commuter told Atlantico:

Frankly, it's amazing to see that. I have no words.

The explicit videos were broadcast for 15 minutes across every screen at the Boqueirao station, in Curitiba, Brazil, during Friday evening rush hour.

The municipal transport company reportedly said in a statement that the police’s cybercrime unit is trying to trace the culprit or culprits, and a source told Atlantico that “the station security system will … be strengthened.”

A Curitiba city hall official told AFP that the company responsible for operating the screens has also been notified and told that it’s got to improve its security.

This isn’t the first time a video delivery device has been commandeered.

In 2012, the security researcher HD Moore found that videoconferencing equipment was often left wide open for peeping Toms to creep in and snoop around organizations.

The problem was that the videoconferencing systems were being set up outside of network firewalls, allowing them to receive calls without administrators having to deal with complex network configuration.

There was the man who spied on, and swore at, a sleeping 2-year-old; a nanny who got spooked by somebody peeping in on her via a baby monitor while she changed a baby’s diaper; and a really deplorable site that was searching for and publishing streams from internet-enabled cameras secured only with default passwords.

If you’re concerned about your own baby monitor security, we previously created a guide that shows you how to secure it.

As far as I know, we’ve never put together a guide to secure bus station arrivals and departures video screens, but if that’s what it takes to keep heaving mounds of sweaty flesh from distracting commuters, we’ll have to look into producing one.

It’s bad enough not seeing your bus’s departure time, let alone getting wrapped up in whatever extraordinarily distracting footage some e-marauder chooses to display!