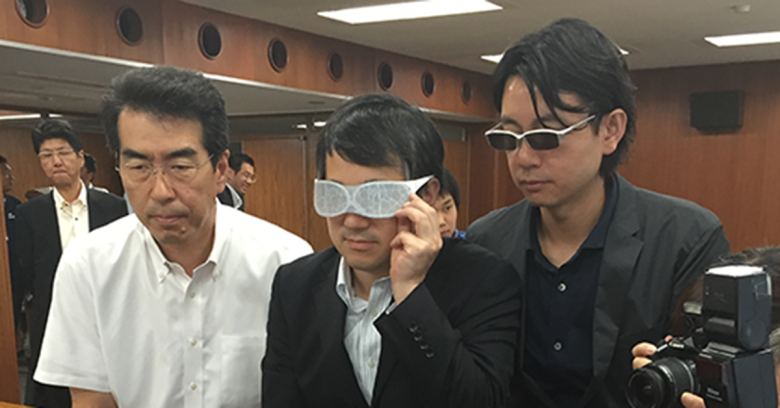 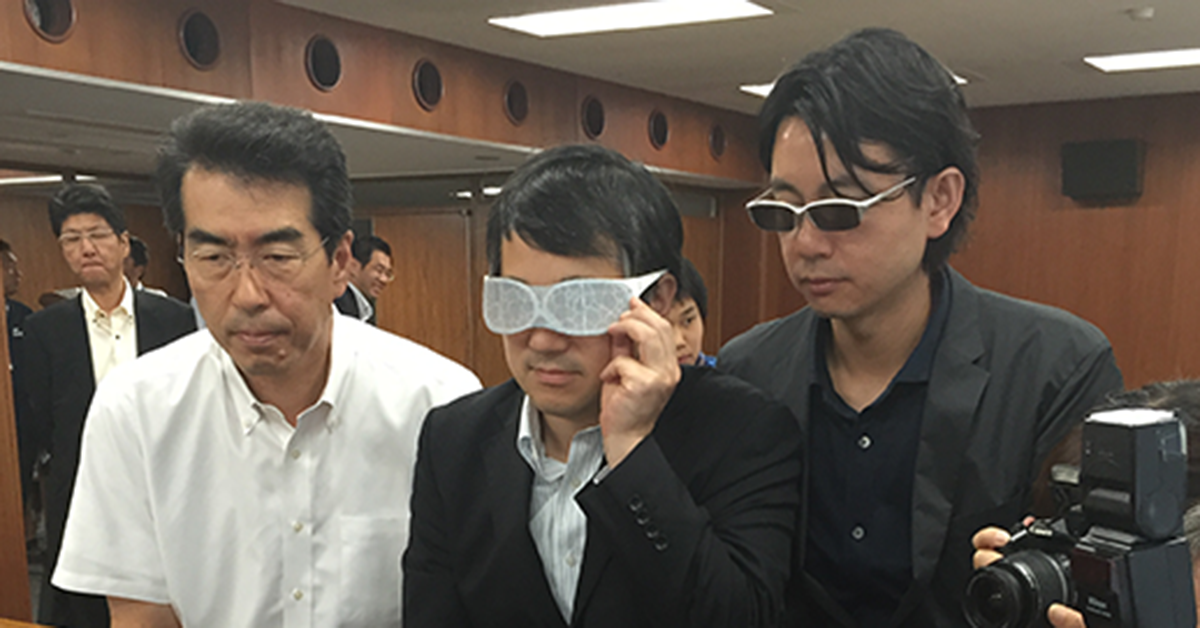 There’s a subgenre of fashion you could think of as FOFR (F-Off, Facial Recognition!).

Designed for those who flee from far too ubiquitous facial recognition technologies – hell, Facebook’s aiming to get to where its systems don’t even have to see your face to recognize your face – the FOFR line includes an ever-expanding range of choices.

For one, we’ve seen creepy T-shirts with distorted celebrity likenesses that were designed to give facial recognition technology a migraine.

(And to give observers a nightmare or two, of the “AAAGH!!! That face is melting!!!” ilk.)

Then too there’s the Flashback anti-surveillance fashion line, which bounces back camera flashes with glass nanospheres that coat the fabric.

As well, if you don’t mind smears of black makeup on your face and neon blue hair hanging over your eyes, you could also look into CV Dazzle’s face detection camouflage.

ITWorld describes the visor as “a lightweight, wraparound, semitransparent plastic sheet fitted over eyewear frames” that’s not exactly what you’d call stylish: at this point, it’s a bulky facewrap, though its creators are promising customized designs and titanium frames in coming versions.

This is only the latest iteration of facial recognition-foiling headgear to come out of Tokyo’s National Institute of Informatics (NII).

The first iteration of the Privacy Visor, unveiled in 2012, was even bulkier, bogged down as it was with a swarm of near-infrared lights that lit up a wearer’s eyes and nose, obliterating the shadows that facial recognition software uses to register features and identify a face.

Powering all that light was a lithium-ion battery, which meant your goggles were wired to a hefty brick.

Google Glasses are geeky enough, but Privacy Visor 1.0 was the pure soul of dork – think eyeglasses carved out of a block of vault-aged geek cheese.

NII has been demonstrating the new visor, which is a far leaner, meaner model.

The demonstrations have shown how face-recognition programs can easily identify someone by comparing video input to a database of head shots, which works even if they’re wearing sunglasses.

But slap on the Privacy Visor prototype – the plastic film wraps around eyeglass frames – and the facial recognition program will be stumped.

The visor works by angling the white plastic sheet down so that it sticks out more near the nostrils than it does near the eyes.

That orientation bounces bright light back toward a camera, which is how the earlier prototype also worked: i.e., facial recognition algorithms expect dark areas around the eyes and brighter areas around the nose and cheekbones, and identification fails when those zones aren’t detected.

NII researcher Isao Echizen says that this is how we can fight back against privacy invasion via facial recognition technologies:

This is a way to prevent privacy invasion through the many image sensors in smartphones and other devices that can unintentionally photograph people in the background.

The latest prototype works without external power. Rather, the surface of the wraparound film can be created in custom designs, such as horizontal lines, a web or hexagons, with the remaining white material reflecting overhead light back at a camera.

A compact, more stylish version, with titanium frames, should be out next year.

We’re looking forward to a stare-down between Privacy Visor and Glass wearers and hoping that nobody’s head bursts into flame, given all the bouncing light and privacy arguments.