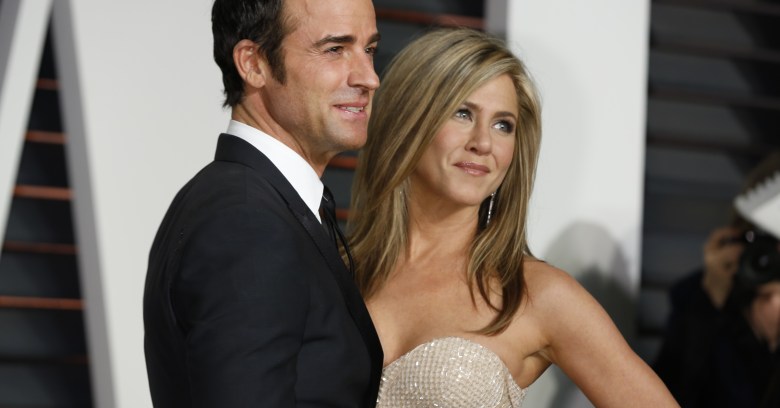 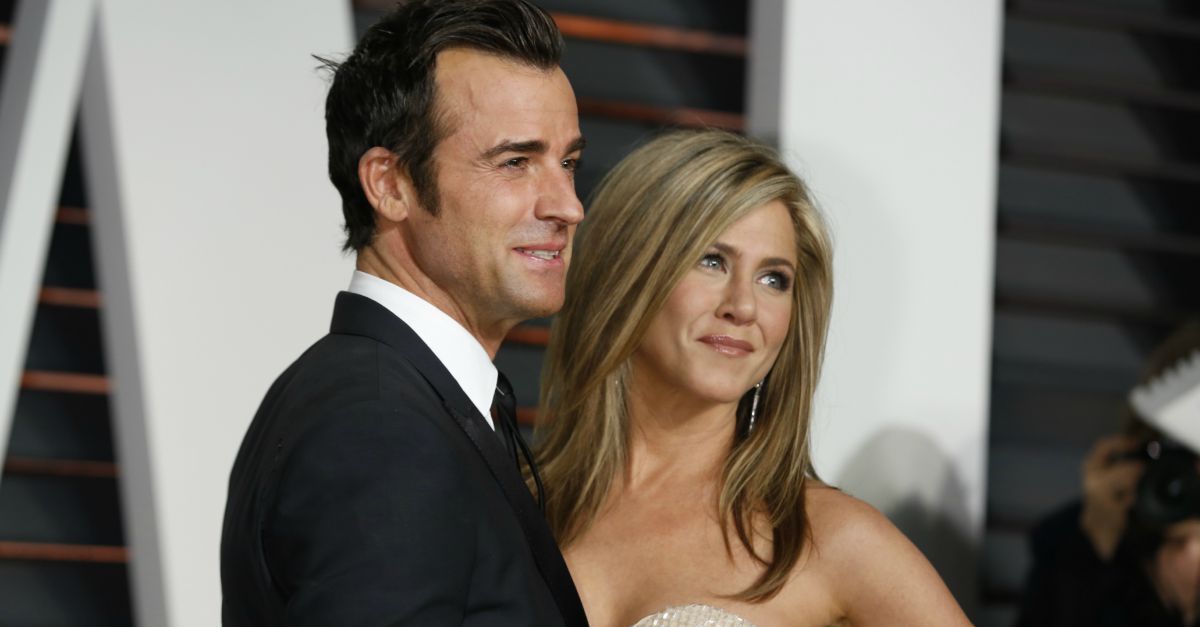 It’s a backless, V-neck, trumpet mermaid chiffon bridal gown with a train of ivory white that looks big enough to consume the slower-moving variety of flower girls – and the Jennifer Aniston Fans Facebook page wants you to join it as it melts in admiration.

Over the weekend, the Facebook page shared this wedding dress picture along with the message:

You have my whole heart for my whole life. #‎WeddingDress 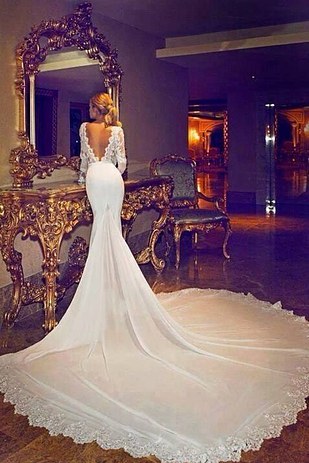 Just one problem. Even though the woman wearing the dress is blonde, like Aniston, and her back is to the camera, it’s not Jennifer Aniston in that photo.

Truth be told, there are a few more problems. For one, even though Aniston did, in fact, marry Justin Theroux recently, that presumably wasn’t the dress she wore – I say “presumably,” because no photos from the wedding have been released.

We know that this photo isn’t of Aniston because the photo is actually one from the 2014 collection of dresses from the Israeli label Dimitrius Dalia – easy enough to find with a Google image search that reveals the photo has been on Pinterest for about a year.

Another tip-off that it’s a flouncy, lacy, steaming pile of hoax is the lack of a blue “verified” check on the fan page – Jennifer Aniston Fans

In other words, even though the page displays the celebrity’s photo in a banner across the top and other photos of her scattered throughout, it wasn’t Aniston herself who said those “forever” words about her heart.

They may call themselves Jennifer Aniston Fans, but whoever’s running the site is doing it without the star’s say-so, and we don’t know who they really are.

Whoever it is, the poster or posters apparently managed to pull the chiffon over some publications’ eyes:

You have to see Jennifer Aniston’s wedding dress! http://t.co/uC9Or8vibq

…though that publication had, in fact, adopted a rather more skeptical tone later in the day.

As of Monday evening, the original Facebook post had been shared by almost 27,000 people, and liked by about 341,000 – with comments that bounced around between sentiments of a) happiness that the celebrity is finally happy and b) “Umm, it’s not Jennifer, people…”

Yes, lovely as the dress is, its train should really be spray-painted in red with the word “BOGUS”. So, why hasn’t Facebook sunk the hoaxy looking post?

It would seem to have the power, after all, at least as far as News Feed stories go.

In January, it announced that users would henceforth be able to report links, photos and video posts as being fake.

Facebook said it would take note of how many times a particular news story is deleted or flagged as being false and would reduce the visibility of such posts accordingly.

Facebook won’t go so far as to delete such posts or make any determination as to the accuracy of submitted news, given that for legal reasons, it wants to be seen as a platform rather than a publisher. But it will add a message to oft-reported items, it said.

At any rate, the wedding dress post was edited on Sunday to omit the “You have my whole heart yadda yadda” bit.

Now, it’s just a photo of a wedding dress, posted on a site that’s named Jennifer Aniston’s Fans, within days of Aniston having been married. While the post doesn’t say it’s Aniston’s dress, it sure does imply that.

But does that make it a hoax? Or just one very strong implication? If it’s the latter, then with a “Like” score cruising up toward the heavens, it’s a very successful one!

So while we may not know who’s running the fan page or what they’re doing with all those Facebook names, what we do know is whoever they are – they most certainly don’t have Jennifer Aniston’s seal of approval!