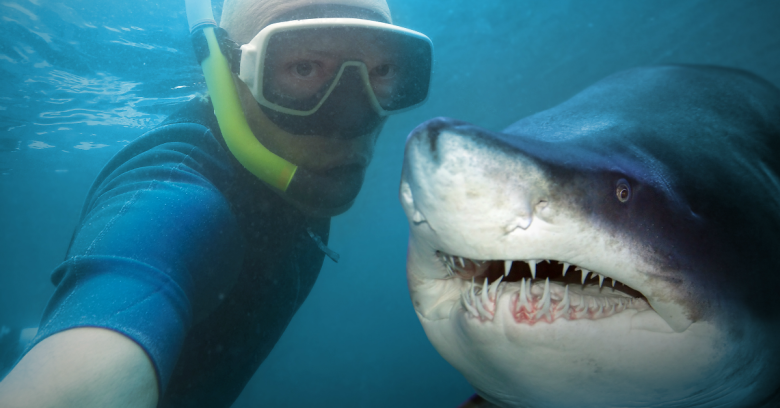 You’ve probably heard of “extreme selfies” taken by people snapping photos of themselves in potentially dangerous locations and scenarios.

There’s more than 9400 posts on Instagram with the hashtag #extremeselfie, and the trend has only accelerated with the advent of the selfie stick.

A lot of these selfies are harmless hijinks, but there’s been a rash of media stories recently concerning people dying from selfie-induced accidents (selfie-cide?).

One story that got a lot of attention was posted on Mashable with the headline: “More people have died from selfies than shark attacks this year.”

As Mashable reports, in 2015 there have been eight deaths caused by sharks and 12 by selfies.

Mashable’s story was a huge viral hit – shared over 132,000 times on social media, and spawning stories in publications from the Sydney Morning Herald to Slate to a news station in South Africa.

Earlier this month, Reuters reported that a spate of selfie deaths in Russia led the Interior Ministry to launch a public safety campaign warning: “A cool selfie could cost you your life.”

People have died taking selfies with weapons, such as the two men in the Ural mountain region of Russia who died while posing for a selfie with a live grenade, and a 19-year-old Texas man who died after accidentally shooting himself in the neck during an attempted selfie.

People are being killed, or grievously injured, while posing for selfies with or near animals: a Spanish man was gored to death by a bull; a California man was bitten while holding a poisonous rattle snake; and a Mississippi woman was injured taking a selfie near a wild bison.

Deadly falls are another consequence of inattentive and risky selfies: a young Russian woman fell to her death while attempting a selfie hanging from a bridge; a Japanese man died this month after falling down stairs at the Taj Mahal.

Not all of these deaths are caused by extreme selfie-seeking, and there have been gut-wrenching if entirely avoidable tragedies, like a young woman in the Philippines who drowned on her 18th birthday attempting to take a selfie on a beach, and the Polish couple who perished taking a selfie when they fell from the edge of a cliff in Portugal, while their children watched.

Authorities in multiple countries are taking action to protect people from harming themselves or others with selfie madness.

Some are responding by banning selfie sticks (Disney World), or outlawing selfies with animals (New York says no selfies with tigers), or with public safety campaigns such as the aforementioned one in Russia.

Maybe it makes sense to have rules or laws barring people from taking dangerous and stupid selfies just to get a few likes on Facebook or Instagram.

But let’s put things in perspective.

Deaths by selfie, extreme or not, are extremely rare.

Some media outlets have sensationalized these stories, blowing them out of proportion, just like they tend to do with shark attacks (the odds of being attacked by a shark in the US are 1 in 11.5 million).

Really, a much more common safety risk in our social media and mobile device saturated culture is texting and driving.

Shouldn’t it be common sense that people should not take that selfie, or use their mobile devices in any way, while driving, flying, climbing, walking, running, swimming, and so on?

Or are we too addicted to multi-tasking and information over-stimulation to just put the smartphone away?

Image of selfie with shark courtesy of Shutterstock.com.

13 comments on “What are you more afraid of – sharks or selfies?”