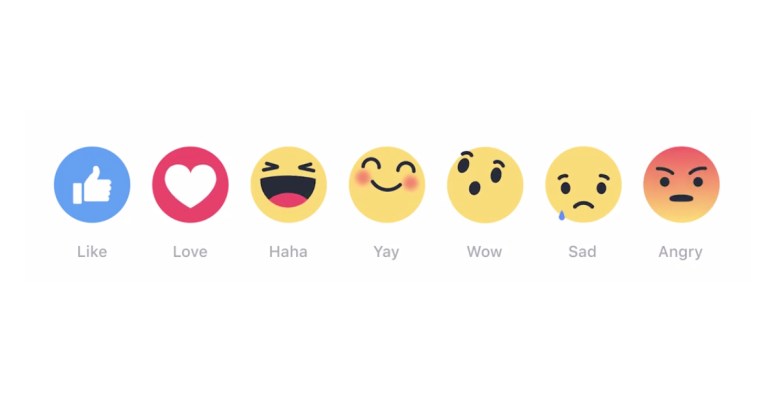 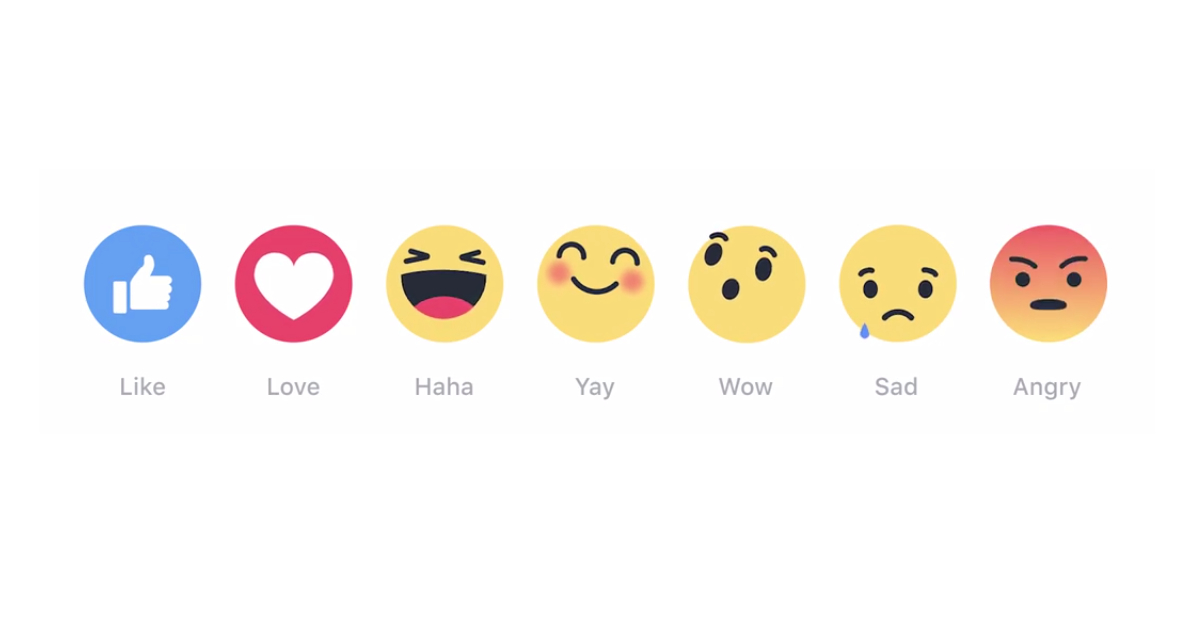 Over the years, users have clamored for a Facebook “Dislike” button.

Now, finally, we know how Facebook feels about the request.

Or finds it Funny, with squinty-eyed, open-mouthed, laughing mirth.

Or Facebook finds the requests Surprising with open-mouthed “Wow!-ness”, or with one-tear-rolling down the cheek Sadness, or with orange-forehead glowering MADNESS!!!

Yes, that’s right – rather than a simple thumbs-down Dislike button, Facebook is testing a set of six additional emojis that, at this stage, line up as options next to the standard “Like” button.

According to a posting Mark Zuckerberg made on his Facebook page on Thursday, the emojis are “Reactions” that line up next to the plain old Like, signifying Love, Haha, Yay, Wow, Sad and Angry.

What he had to say about these very-much-not-thumbs-down emojis:

For many years ... people have asked us to add a "dislike" button. Not every moment is a good moment, and sometimes you just want a way to express empathy. These are important moments where you need the power to share more than ever, and a Like might not be the best way to express yourself.

At a Q&A last month, in response to yet another question about the Dislike option, Zuckerberg said that Facebook was working on getting some more nuance into users’ hands beyond the Like button.

He said that Facebook has spent a lot of time thinking about “the best way to give you better options for expressing yourself, while keeping the experience simple and respectful.”

The company started to test what it’s calling “Reactions” on Thursday, rolling it out first to users in Ireland and Spain.

To use the feature, you long-press the Like button until the six Reactions pop up, and you choose one from there.

Posts will reportedly show reaction counts alongside the number of comments: for example, 10 Loves, 4 Yays.

In retrospect, the introduction of emojis and the shunning of a thumbs-down button isn’t surprising.

Plenty of users have, reasonably enough, wanted an option besides Like, given how inappropriate a reaction it can be to posts regarding tragedies or sad events, such as the deaths of loved ones or the refugee crisis.

Since Zuckerberg publicly said that more options were in the works, his official Facebook page has been flooded with thousands of comments about the dislike option: many have been pro-Dislike button, but others have said that it would lead to cyberbullying and negativity.

The Verge quoted this one:

Please don’t put a dislike button, as much as there is times I would love it, would much rather express my thoughts in words to be completely direct on my opinion.

While the emojis aren’t a dislike button, they will give users “the power to easily express sorrow and empathy, in addition to delight and warmth,” Zuckerberg said.

Keeping a Dislike button out of users’ hands won’t prevent bullying, by any means. Facebook, like many social media networks, has a long history of being used as a platform to torment people.

You don’t need a Dislike button to post vicious things about people in plain old text comments, after all.

Facebook has done commendable work to battle cyberbullying, including rolling out a Bullying Prevention Centre in the UK and Europe last year – a culmination of years of work by Facebook engineers and partners at the Yale Center for Emotional Intelligence.

Mark Zuckerberg’s network has proven itself to be a bit tone-deaf on some issues though, including its real-name policy.

It’s also, of course, had a spotty history when it comes to the occasional security and privacy glitch.

But overall, Naked Security gives Facebook the thumbs-down far less often than we once did.

As Naked Security’s Paul Ducklin pointed out recently, we have good cause:

Of course, many of our readers would rather douse their keyboards with glue than ever log in to a Facebook account and risk whatever privacy incursions or utter waste of time would possibly occur therein.

But for the rest of us, keeping Facebook thumbs-down-free is, in my opinion, a welcome way to at least try to keep the bullying at bay and the positivity up.

For that, I’m giving the company a thumbs-up.

If you want to emoji your own thoughts on the matter in the comments section below, go right ahead: we always <3 to get your take.