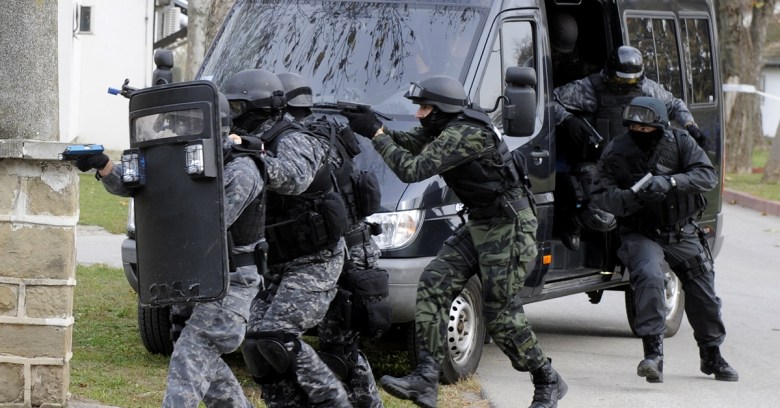 About a year ago, the National Report threw social media into an uproar when it published an article about a teenager who’d been convicted on terrorism charges for swatting, and sentenced to a prison term of 25 years to life.

It turned out to be a hoax: a fake story with a sensational headline published by a satirical website well-known for such.

This, on the other hand, is not a hoax: US lawmakers on Wednesday have in fact put forth a bill to make swatting punishable by prison sentences that range from a maximum of one year to life.

Swatting is the practice of making bogus emergency calls, as a prank or as revenge, in the hopes of getting emergency responders to descend on a victim.

“Prank” is an egregiously inappropriate term for such a practice, which puts those emergency responders, targeted victims, and their families at potentially mortal risk.

In fact, lawmakers say that swatting has resulted in injury to law enforcement officers, as well as heart attacks, and serious injury to victims.

It sounds like it should be classified a federal crime, but, in fact, it’s not.

Rather, current federal law prohibits using the telecommunications system to falsely report a bomb threat hoax or a terrorist attack, but it doesn’t prohibit falsely reporting other emergency situations.

From Clark’s press release about the bill:

While federal law prohibits using the telecommunications system to falsely report a bomb threat hoax or a terrorist attack, falsely reporting other emergency situations is not currently prohibited.

The proposed bill would punish anyone who…

...uses a telecommunications system, the mails, or any other facility of interstate or foreign commerce to knowingly transmit false or misleading information indicating that conduct has taken, is taking, or will take place that may reasonably be believed to constitute a violation of any State or Federal criminal law, or endanger public health or safety.

This one’s serious: they’re looking at maximum prison terms anywhere from one year to life.

Even if swatting doesn’t lead to any of those things, perpetrators can still face a maximum of one year in jail, a fine, or both.

Besides potential prison sentences, the fines likely will amount to more than just a slap on the wrist, given how much of a strain swatting puts on police resources.

The FBI in 2013 estimated that at the time, they were seeing hundreds of swatting attacks every year.

It’s tough to generalize about how much swatting incidents cost police, but if there are going to be fines levied against swatters, they could be stiff.

Some states have already moved to hold swatters financially accountable for these costs.

California’s Senate Bill No. 333, which went into force in January 2014, mandated that those convicted of swatting be required to reimburse municipal departments that respond to fake emergency calls up to $10,000.

Image of Special force police in action courtesy of Shutterstock.com