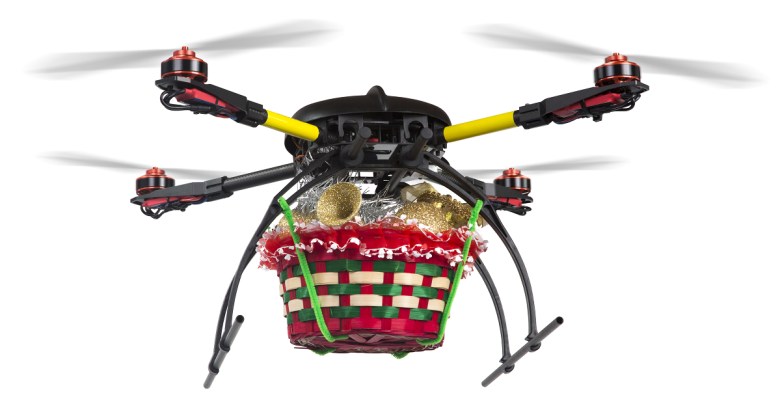 Does it weigh less than 55 pounds? Does it perhaps have the mass and dimensions to be a hobby drone?

Get ready to register that new toy if it does turn out to be a small, unmanned aircraft system weighing between half a pound (250 grams) – and 55 lbs (25 kgs).

In other words, what the FAA likes to call sUAS.

The US Federal Aviation Administration (FAA), scampering to prepare for flocks of drones expected to be unwrapped next month over the holidays, on Monday released a list of recommendations for how to better monitor recreational use of the machines.

Under the proposal, most drone owners would have to register the machines with the federal government, which would place the information in a national database in what would be the first time for such requirements.

The skies are already filled with hobby drones.

The swarms are going to be thicker still: The Consumer Technology Association forecasts that 400,000 drones will be sold in the US this holiday season.

That figure doesn’t even include the commercial drones being developed by Google (now known as Alphabet), Amazon, Wal-Mart and others.

The FAA’s recommendations aren’t rules yet, but they likely will be in the coming month.

FAA Administrator Michael Huerta last week said in a post that there’s still time for public comment, but a final version of the rules will likely be released in December and go into effect shortly thereafter.

Registering drones will “instill a sense of accountability and responsibility among UAS pilots,” he said.

By some estimates, as many as 400,000 new unmanned aircraft will be sold during the holiday season. Pilots with little or no aviation experience will be at the controls of many of these aircraft. Many of these new aviators may not even be aware that their activities in our airspace could be dangerous to other aircraft - or that they are, in fact, pilots once they start flying their unmanned aircraft.

The recommendations come out of a special task force the FAA pulled together with the purpose of figuring out how to wrangle the proliferation of drones.

Also on board were 24 other drone, aeronautics and aviation experts from Amazon, Best Buy, GoPro, Walmart and multiple industry groups and associations.

Vos said that there was a lot of compromise involved in coming up with the guidelines:

It is a great statement that all of the members on this task force have really rolled up their sleeves and were willing to work very, very hard hard to find the right compromise.

In its report, the task force recommended that drone operators:

Plenty of drones are, of course, getting into all sorts of trouble by avoiding such guidance, as they hover over playgrounds and London’s Hyde Park, drop packets of drugs into prisons, gawk at sunbathers, follow somebody home and then hover outside their bedroom window, buzz at 365 meters (1200 feet) above Liverpool city center, fly over a house of neighbors tied up in a six-year boundary dispute, linger above people to apparently record them as they enter their PINs into ATMs, get a bellyful of birdshot courtesy of a privacy-loving/rifle-toting neighbor, cause airborne wildfire fighters to drop their loads of fire retardant and turn around lest they collide, and get operators arrested for flying over the White House.

4 comments on “Buzz your drones over to registration, recommends FAA”