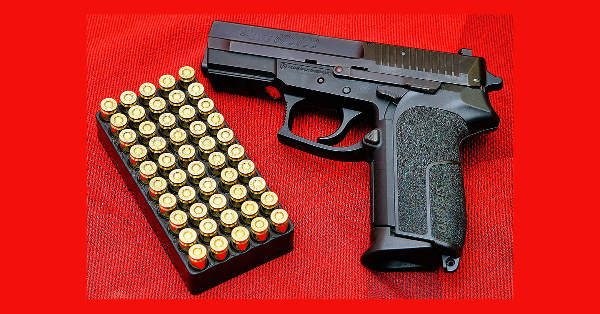 The law has grown quite adept at flipping on the light switch in the dark web to unmask crooks, be they child predators, kids buying poison, people hiring hitmen, or operators of contraband sites like Silk Road or Utopia.

(Well, if not “adept” with the technology themselves, then perhaps adept at simply buying Tor-cracking know-how from Carnegie Mellon or court-ordering it out of CMU researchers.)

You would think that somebody whose business it is to be up on technology and information privacy would know this.

You would be wrong, at least with this one particular IT manager.

As the National Crime Agency (NCA) reports, Darren Hillyer, a 38-year-old from the UK, has been jailed for 5 years after trying to buy a gun on the dark web.

Hillyer posed as a woman who was gunning for an ex-lover whom “she” had discovered was a child abuser.

Hiding behind the alias “Emma,” he ordered a 9mm handgun and 50 rounds of ammunition from a gun trader on a dark web forum.

Then, he got a middleman to pick it up and forward it to him.

To that end, he got in touch with 47-year-old Ian MacPhee, from Newton Abbot, Devon: a man whom he’d met in a chat room but never in person.

MacPhee obligingly went by to pick up the mystery package from a post office in Newton Abbott.

He didn’t know what was in it, but if he’d opened it, he’d have found out that it wasn’t a gun: rather, NCA agents had tucked a plastic replica inside a Digital Audio Broadcasting (DAB) radio that was under their control.

NCA officers arrested MacPhee on the morning of July 28.

They traced the package’s forwarding address to Hillyer later that day and arrested him at an insolvency company in Euston, London, where he worked as an IT manager.

What type of IT professional wouldn’t know that the cops are waiting for crooks to make illicit deals on the dark web?

Unfortunately, in this man’s case, it sounds like it’s the type of person who’s delusional.

Hillyer’s colleagues told the agents that he’s a “fantasist” and a “Walter Mitty type character.”

They said that Hillyer had claimed that he worked for intelligence and security services who’d issued him a gun.

While being interviewed, Hillyer told police that his activity on the dark web was part of research to help him apply to join the NCA.

Hillyer and MacPhee appeared at Bristol Crown Court in mid-September.

According to The Register, Hillyer was given a 5-year sentence at his sentencing hearing in Bristol Crown Court on Thursday.

At the same time, MacPhee was ordered to pay a £275 fine.

I don’t see the point in admonishing people who can’t tell the difference between fantasy and reality.

Let’s hope this poor man gets psychiatric care, and that he gets it long before he ever has a second chance to make his dreams come true on the dark web.

For others, it’s thankfully getting tougher to buy guns online.

That’s because the dark web gun trade has been infiltrated by cops and scams, as Motherboard reported recently.

In other words, AK-47s and pistols are getting tougher to casually buy with a few clicks and some bitcoin: a rare piece of good news in an era stained with horrifying gun-related violence.