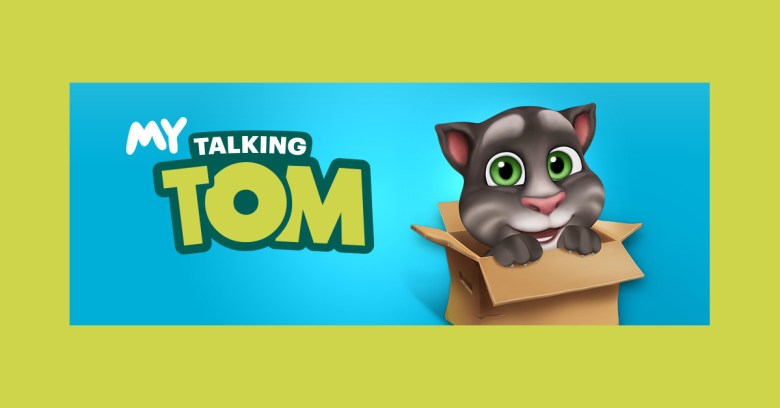 My Talking Tom, heralded as the “world’s most popular cat” by the maker of the Android and iOS children’s app, is a fully animated, interactive 3D character that users can tickle, poke, play with, spend parents’ money to customize, get to repeat what they say, force to sing a pimple-themed version of Lady Gaga’s My Poker Face, and induce to dance Gangnam style.

What he is not designed to do is to serve as a delivery vehicle for ads that invite children to “f**k.”

But that’s exactly what the cartoon cat was used for in two in-game pop-up ads that were shown over the course of four days in August.

The ads were for Affairalert.com: a site that advertises the grammatically garbled “Meet Secret Sex Affairs” and which warns that “This site likely contains sexual pics of local hotties you may recognize!”

The UK’s Advertising Standards Authority (ASA) on Wednesday upheld complaints made by two parents, who said that their 7-year-old and 3-year-old children saw the ads while playing the game.

This is the second time the ASA has made a ruling on the content of ads featured in the app.

In June, the watchdog had confirmed that ads of three naked women, engaged in sexual activities with four other women, were shown, with a “play” symbol on top of the image.

According to the ASA, this time around, this is what the ads showed (profanity rendered work-safe):

My Talking Tom is made by Outfit7 Ltd, but the ASA ruling was against the advertiser in question, Plymouth Associates Ltd.

Plymouth Associates, for its part, denied placing the ads in the app and said that it suspected that they’d been produced and placed “by a malicious third party,” as opposed to an affiliate, but the company couldn’t identify who was responsible.

Given that Plymouth Associates couldn’t present any evidence to confirm that somebody else was responsible, the buck stopped there, the advertising watchdog said:

Given that the ads promoted Affairalert.com and they were the sole beneficiaries, we considered that Plymouth Associates were responsible for the material and for ensuring that it was compliant with the Code.

The code referenced by the ASA is concerned with social responsibility.

The ASA said that Plymouth Associates had procedures in place intended to prevent their ads appearing in apps or websites that could appeal to, or were targeted at, users under under the age of 18, but they sure didn’t work in this case.

From the ASA’s ruling:

We were concerned... that their procedures had not been adequate to ensure their ads only appeared in appropriate mediums. Therefore, we concluded that the ads had been irresponsibly placed and breached the Code.

The upshot: the ASA told Plymouth Associates Ltd to ensure that its ads were targeted appropriately and didn’t pop up again in apps played by children.

In the meantime, poor Talking Angela.

When she’s not putting up with internet freak-outs about scary guys looking out of her cartoon eyeballs, she has to put up with users making Talking Tom pressure her into cat-inappropriate behavior.

And now this? My Talking Tom delivering lewd ads?

Forgive me for what I am about to do, but it must be said: it’s Cat-astrophic.