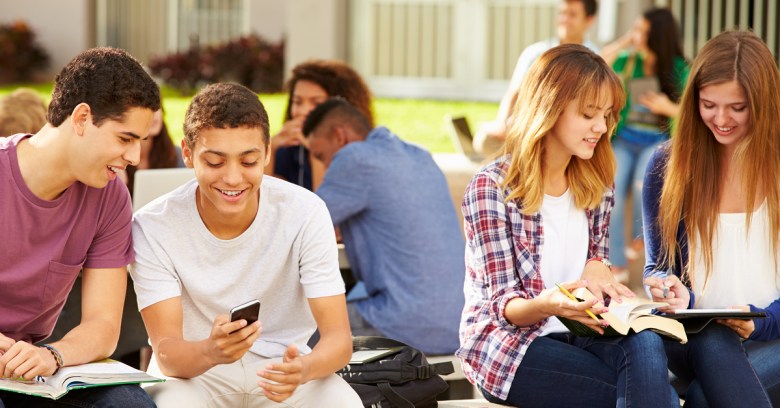 The sexting apocalypse exploded last month, when Superintendent George Welsh initially estimated that half the school was involved – that’s about 500 students, including some eighth graders.

The New York Times described the app as a type of “vault app”.

Those apps look innocent enough. Some disguise themselves as calculators.

But after a user enters a password, the apps reveal themselves to be secret keepers of troves of photographs.

(Naked Security actually took a look at a number of these apps the same year that Snapchat reared its marketed-at-kids sexting head.)

When the sexts were discovered by adults – I haven’t gleaned how that happened – the high school equivalent of Pandora’s Box flew open.

Parents were outraged, administrators scampered to find missed clues, and the police and the District Attorney’s office considered whether to file child pornography charges against some of the participants.

An unknown number of students were suspended. The football team forfeited its last game of the season because so many players were involved.

It wasn’t just jocks, though. As the investigation wound on, it turned out that there were actually a total of 106 children involved in some way with the images, be they swapping the photos or actually portrayed in them.

Though that’s only a fifth of the initial estimate, that’s still a hell of a lot of teenage felons to wrangle.

Because yes, possession of explicit photos of minors is a felony in Colorado, as it is in many states where laws designed to protect children from predatory adults turn into head-scratchers when you get masses of kids doing what kids do.

Specifically, what kids do is act stupid, as LeDoux said during the press conference on Wednesday:

The investigation suggests these were kids doing stupid kid things.

When the scandal first broke, LeDoux said that he wasn’t keen on arresting hundreds of children and that he’d “use discretion” if he did decide to file charges.

Because here’s the sticking point: most of the distributors of this child pornography are themselves minors. In some cases, they took photos of themselves and sent them to others.

In fact, a few months ago, a 17-year-old boy from North Carolina was facing charges for sexting his girlfriend.

Under North Carolina law, being 17 makes him an adult, which thereby made him eligible to face felony charges of sexually exploiting a minor by sexting.

As if that wasn’t head-bangy enough, because he sexted selfies when he was 16, he also stood accused of exploiting himself.

He was facing four felony charges for sexually exploiting himself and one for having a sexually explicit picture of his girlfriend (that she sent him).

Fortunately, sanity also broke out here: he agreed to a plea bargain and was given a year of probation, during which time both he and his girlfriend were forbidden to own the devil’s gadget – a mobile phone – that got them into trouble.

That same strain of sanity has evidently gripped Colorado.

LeDoux pointed out that none of what the kids did at Canon City High would have been illegal if they were adults:

Consenting adults can do this to their hearts’ content… [But] if the subject is under the age of 18, that’s a problem.

But here’s the thing: in Colorado, prosecutors have so far found absolutely no evidence of aggravating circumstances.

That means there was no coercion, no bullying, no unlawful sexual contact, and no posting of explicit photos online, LeDoux said.

In the vast majority of photos, the faces of students weren’t visible.

There was, mind you, enough evidence to prosecute a “handful” of students, he said.

But rather than pressing criminal charges, prosecutors have left this matter in the hands of parents and educators.

The Fremont County School District will offer education about sexting to both students and their parents. The suspended students will also get education and counseling.

LeDoux said the decision not to prosecute doesn’t condone what the students did and that his office is sending warning letters to all 106 students involved.

The DA said he suspects that the kids have deleted all the photos. If not, additional charges could be in the offing.

Zero criminal charges are cause for celebration, given that there was apparently no harm, no foul in this case, but this could have turned out far differently: all too often, young people send naked pics to their boyfriends or girlfriends, only to find out the next morning that everyone in school has seen them.

We’ve seen far too many children hounded to the point of suicide over sexually explicit photos.

Research has shown that putting mobile phones together with teen hormones produces sexting.

We better figure out how to deal with it on a legal, educational and cultural level.

After all, let’s face it – Colorado got lucky.

There were no casualties, no revenge-porn victims, no cyberbullies.

Let’s hope that that luck is as contagious as the prosecutorial sanity that’s broken out.