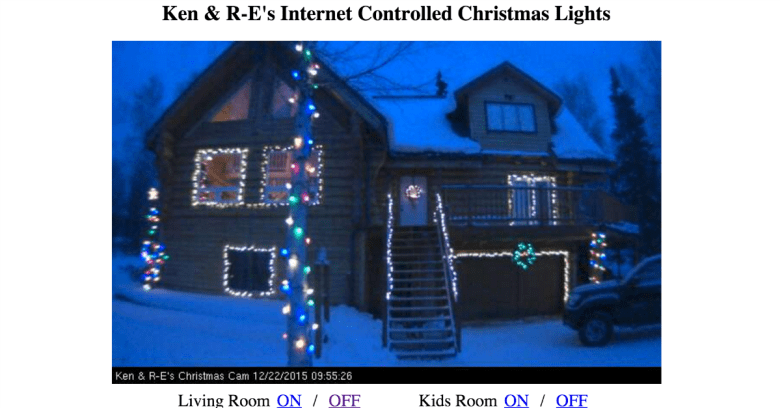 Lots of people spread some Christmas cheer and brighten the long winter nights by hanging colorful lights on their homes and trees.

But Ken Woods has taken things much further than that, giving anyone with an internet connection the ability to control his Christmas lights through a website, christmasinfairbanks.com.

By clicking the <ON> and <OFF> links you can control a dozen different light arrangements on trees, windows, doors and wreaths – if no one else is trying to do the same thing at the same time – and see the effects through a web camera that’s nailed to a tree in front of the house.

Because they live out “in the middle of nowhere” in Fairbanks, Alaska, with a really slow internet connection, the website runs on a virtual server in the Amazon cloud, which will cost Woods about $450.

Woods gladly accepts donations to defray the costs and so far has taken in about $225 – a few dollars at a time.

I've written some code that runs on an Amazon cloud EC2. There's some software that actually comes back to our house and fetches the image directly from the camera and uses that image to distribute it out from the EC2 on the video side.

The hardware side is essentially a power strip that has a web server built into it and relays built into it that are stately aware and able to connect via ethernet.

There have been other Clark Griswolds who have put their Christmas lights online, and even some fakes where controlling the “lights” merely meant switching between images of the lights turning on and off.

But Woods’s setup is legit, and he can prove it to you.

We’re wary of hoaxes at Naked Security, so when I reached out to Woods he sent me a private, expiring URL for controlling the lights on a Christmas tree.

As I watched the live feed, I switched the tree on and off about a half-dozen times, at different intervals – and it worked each time.

This is the sixth year that Woods and his wife Rebecca-Ellen have given control of their Christmas lights to the world, but this year it’s attracted a lot more attention from media around the world, and millions of visitors to the website.

The response has been overwhelmingly positive and Woods said he receives hundreds of emails from well wishers.

But some people have tried to spoil the fun by constantly turning the lights off, so Woods said he’s built in some added security to prevent that from happening.

Woods asks on his website for people not to come by the house (“It’s actually much more entertaining over the internet … Please don’t be that guy”), and to email him if they’re watching the feed and see anything suspicious.

Woods, who seems to have a really good sense of humor, said he’s doing this to have fun and spread joy.

I’m just a giant kid at heart. It’s my way to enjoy the Christmas spirit.