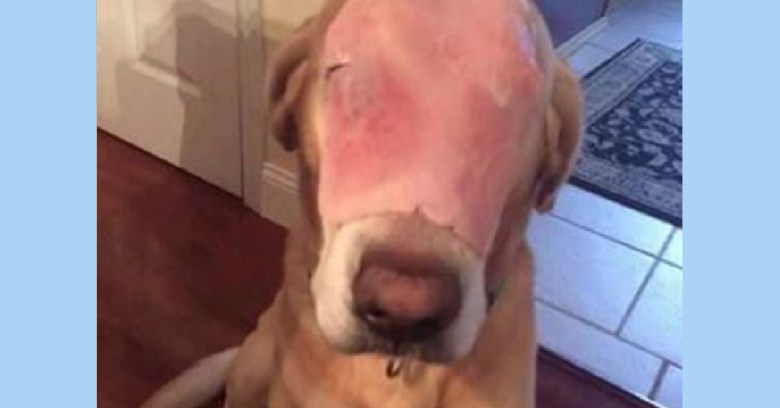 The dog’s face was HORRIBLY BURNED after it tried to save his family from a fire, its eyes completely MELTED OFF its disfigured pink FACE and…

Is that honeybaked ham?!

If you haven’t seen it yet, this is the Facebook hoax that appalled, laughed and tricked us out of 2015: a post of a dog that was supposedly burned trying to save its family from a fire,  but who was actually painlessly reupholstered with a slice of ham on its face.

It was promising prayers but looking for shares, of course: 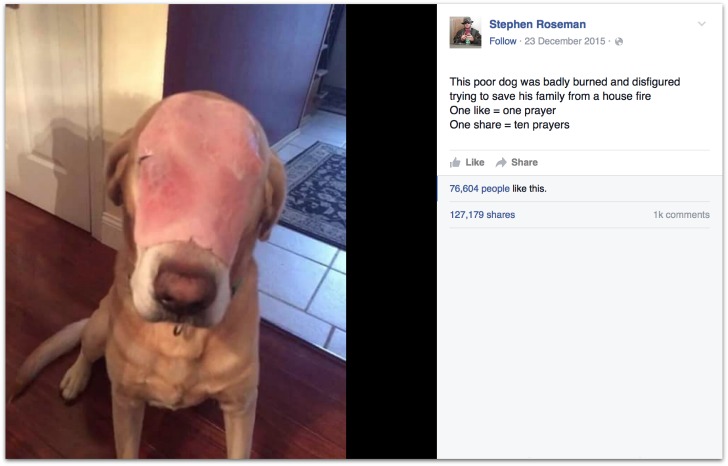 As of Wednesday, it had been shared over 127,000 times. In mathematically accurate prayer calculations, that comes out at more than 12,700,000 utterances of “oh, puh-LEEZ.”

Many found it idiotically hysterical: a great way to feel superior to those who took a closer, and more skeptical, look.

Many found it plain old idiotic, with comments like this:

You are an idiot to hurt and play on people's emotions

While still others sympathized with the dog who was forced to wear and not eat its luncheon meat blinders:

How long poor little guy ,people are so cruel ,JUST HOW LONG DID YOU MAKE HIM WAIT TO EAT THAT HAM, LOL

And of course it ushered in a club sandwich worth of ham-themed memes, including a poor little girl who was “born with a terrible disease” and an earnest argument from The Joker.

But really, only about as funny as a whoopie cushion, given that its aim is to trick the gullible so that they can be laughed at.

Roseman was out to ridicule those who like and share “send a prayer” messages in particular, as he admitted in a comment picked up in a Snopes debunk:

People, people this isn't even my dog, I found this picture on fascistbook, stole it, and decided to use it in a prank to fool these religitards.
So I did, and low and behold idiots left and right fall for it, and those that didn't, seem to think they have a superior intelligence or something, for pointing out the obvious.
Keep in mind, I never told a single soul to like this, that is their choice...

Here’s a clue that this is one is bogus: it doesn’t include a link to a news story from a legitimate news outlet.

Many people often adopt the attitude that there’s “no harm” in sharing something like this. Plus, in a case like the ham dog, we often love to share so we can jump on the jeering-at-others/feeling-smarter-than-them bandwagon.

Why wouldn’t you accept what could be a free lottery ticket with a $4.5 million payout, just in case the Zuckerbergs really do get it into their heads to give away $4.5 million to random strangers?

But you know, it can hurt. It’s crying wolf. It’s eroding our own credibility.

And laughing at others doesn’t make us better than them. It makes us trolls.

This is the security resolution I made this year: to yell at people more – or, more helpfully and more gently, to remind my connections about the importance of not spreading chain letters.

You can help your own connections by sharing this article with them on Facebook, and by telling your friends to join Naked Security’s Facebook page.

I can’t promise you any prayers for liking or sharing the debunking of a Facebook hoax, but I can promise you that the internet will become a tiny fraction better if we stop laughing at each other for getting swindled.

4 comments on “Please don’t pray for the dog injured in a fire, it’s just ham”