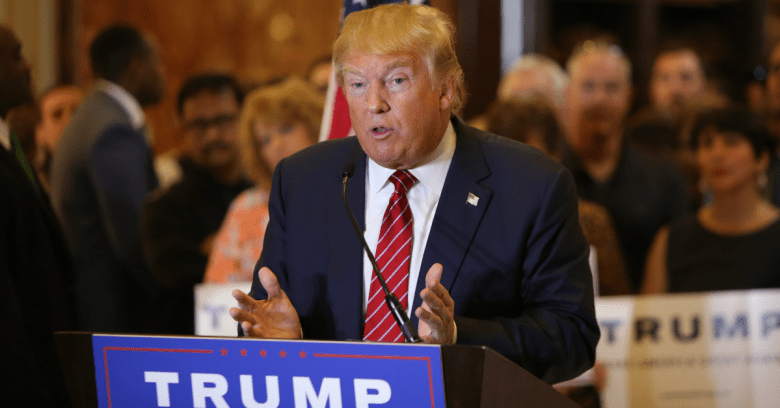 Donald Trump is a polarizing figure – you either love him or hate him – but he is impossible to ignore.

The Donald is everywhere.

Since joining the 2016 race for US President, Trump has dominated media coverage of the race, lifted TV ratings wherever he appears, and is way ahead of his rivals in the polls.

He has a way of speaking (blunt, off-the-cuff) that is perfect for soundbites, tweets, and headlines.

Although his pledge to “Make America Great Again” has inspired millions of fans, Trump’s many controversial statements – calling Mexican immigrants “rapists,” proposing a ban on Muslims and Syrian refugees entering the US, targeting the appearance of women, and so on – have made him a target.

Just as Trump has called for “closing that internet up” to keep terrorist groups like Islamic State from using “our internet,” some hackers have tried to do the same to him.

Back in July 2015, Trump’s Wikipedia page was defaced twice in one day by some anonymous editors who attempted to delete the whole entry (it was restored within minutes both times).

Now there’s a much simpler, and perfectly legal, way to erase Trump from the internet.

If you really can’t stand seeing mentions of Trump as you browse news headlines and websites, there are several browser extensions that filter out mentions of his name for you.

Like web filters that many companies use to prevent their employees from accessing webpages with offensive, illegal or potentially malicious content, browser extensions like Trump Filter scan the pages you visit for Trump-related terms in order to block them.

Rob Spectre, the developer behind Trump Filter, says he wants to “erase” Trump from the internet because of his “toxic candidacy”:

... the Trump Filter is presented as part of the antidote for this toxic candidacy. This Chrome extension will identify parts of a web page likely to contain Donald Trump and erase them from the internet.

Spectre says he created the Trump Filter extension “out of a profound sense of annoyance and patriotic duty,” not at the behest of any party or candidate, and is not making any money from it.

If you install the Trump Filter extension on your Chrome browser, it makes references to Trump “disappear,” based on three levels of filtering – “mild,” “aggressive,” and “vindictive.”

With the extension set to “vindictive,” all headlines and sentences containing his name are removed.

As Spectre says, Trump Filter can’t be installed on your television, and it won’t delete images of Trump from the web either.

But Spectre says he hopes that, if enough people use his extension, it will send a strong message to the media that “America is ready to move on from this inveterate jackass.”

Some other Chrome extensions use a milder form of censorship to remove references to Trump, by replacing his name with amusing and insulting phrases.

One extension called Trump2Voldemort changes “Donald Trump” to “He-Who-Must-Not-Be-Named” – a reference to the evil Lord Voldemort of the Harry Potter series of movies and books.

Another extension changes Trump’s name to “your drunk uncle at Thanksgiving.”

Of course, Donald Trump might not be the only thing on the internet you want to avoid.

Last month we wrote about a Chrome extension “Force Block” that covers any webpage containing potential spoilers for Star Wars: The Force Awakens with a black screen containing a warning.

Image of Donald Trump courtesy of a katz / Shutterstock.

15 comments on “Dump Trump! A Chrome extension to censor “The Donald” from the web”