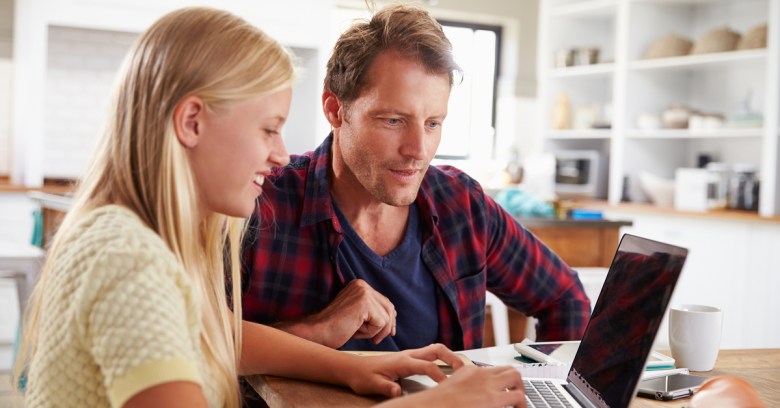 Been poking around to see what your teen’s up to online?

If so, join the crowd.

Your behavior is pretty normal, judging by the number of parents who admit to checking which websites their teens visit and snooping on their texts or other social media trails.

According to a new report from the Pew Research Center, the majority of parents monitor their teens’ online activity.

The Pew Research Center surveyed parents of 13 to 17-year-olds and found that they’re taking a range of steps to keep track of their kids’ online lives and to encourage them to use technology appropriately and responsibly.

The specific steps and how many parents are taking them:

The survey also found that a majority of parents – 65% – are restricting their kids’ screen time as a disciplinary tool.

They’re not just using it as a disciplinary tool, though: 55% of parents limit how often, or for how much time, the kids can go online.

Then there are the parents who want far more direct control over their kids’ online safety via access to their children’s accounts – namely, the 48% of parents who know their teen’s email account password.

Knowing teens’ logins is a pretty direct way to monitor them, and the survey suggests that parents prefer it over technologies that would monitor, block or track teens in their stead.

The number of parents who use a technology-based approach to monitoring their kids:

Parents aren’t doing this without communicating with their teens, by any means. Here are the numbers of parents who are talking to their kids about what’s appropriate online:

There are, unfortunately, all too many reasons why monitoring kids is prudent.

Cyberbullying can be one of the many pitfalls that may trap kids when they venture online.

Teens have reported that cyberbullying is worse than face-to-face bullying, given that it can happen at any and all hours of the day, it’s relentless, and it’s driven by crowd behavior – in fact, you can consider it a horrible manifestation of crowd-sourcing.

Another danger is that teens will be stalked by predators who groom them on social media, possibly leading to kids being talked into meeting their stalkers and then being sexually abused or raped, or to being threatened to undress in front of a webcam and then being sextorted.

Alarmingly, sexting, with the invasion of privacy it so often brings, has become normalized in children’s lives.

According to a 2013 poll of 500 children conducted by online safety centre ChildLine, 60% had been asked to send a sexual image or video.

The UK National Crime Agency’s center for tackling abuse, Child Exploitation and Online Protection Command (CEOP), in June 2015 warned that police and child protection experts are dealing with at least one case every day of children being ensnared in serious cases of sexting, including grooming attempts by pedophiles.

Parents also need to keep an eye out for websites and apps, many squarely aimed at children, that collect and share their personal information.

Last year, the UK Information Commissioner’s Office (ICO), along with 28 other data protection regulators from around the world, found that 41% of 1494 examined apps and websites raised concerns over how data was being collected and shared with third parties.

Of course, parents also need to know which social media platforms teens are hanging out on.

To that end, we’ve covered the apps and websites parents need to be aware of.

So how do you keep up with teens, if you’re not actively monitoring their online activity?

Thinkuknow offers the latest information on popular sites, mobile phones and new technology to let the public know what’s good, what’s not and what you can do about it.

For those who look after young people, the site also offers resources for use in the classroom or at home, as well as a place that anyone can use to report if they feel uncomfortable or worried about someone they’re chatting with online.

Do you monitor your kids?

Obviously, there are a lot of dangers to kids online, and it’s understandable that parents would want to monitor their activities. So, readers, what’s your view?

Image of Father and daughter at laptop courtesy of Shutterstock.com

3 comments on “Majority of parents monitor their teens’ digital activity. Do you?”