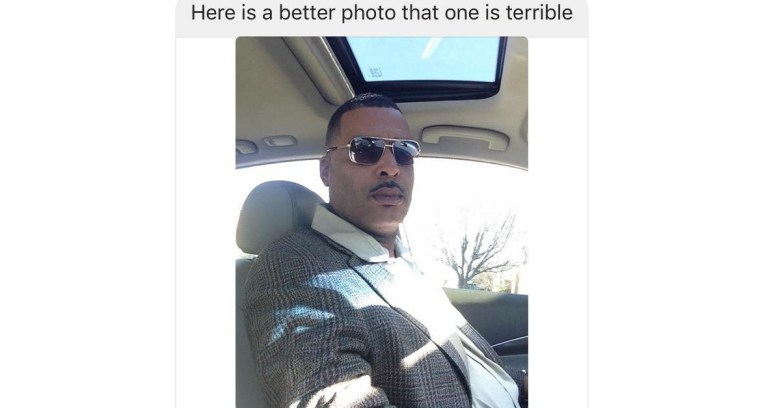 You have to admit, he did look a bit puffy. Shiny cheeks don’t help.

So Donald Pugh, who hails from the US state of Ohio, posted a more flattering shot of himself to the Facebook page of the Lima, Ohio, police department.

The police had posted two of Pugh’s mugshots because he was wanted for drunk driving.

After he saw the two mug shots, Pugh, 45, went ahead and posted a nicer selfie on the police’s Facebook page: one of himself wearing sunglasses in a car.

Here’s the taunt he posted along with the sporty new photo:

Here is a better photo that one is terrible.

Yea, it was pretty terrible.

The new one was way better – so much better, it helped citizens to identify Pugh, who was arrested in Florida on Tuesday.

According to a post on the Escambia County Sheriff’s Office’s Facebook page, Florida police picked Pugh up after they received a tip.

The Escambia County police included a new mug shot with their post: one that was far more flattering, showing Pugh grinning.

The Lima, Ohio police, said on their Facebook page that they’ll have to wait in line as far as getting Pugh to appear for his Failure to Appear on the drunk driving charge, given that he’s being held for warrants out of Columbus, Georgia.

He was out of the pick up radius for Ohio but not in Florida.

Alas we will wait our turn.

We now have an answer: Take a selfie!