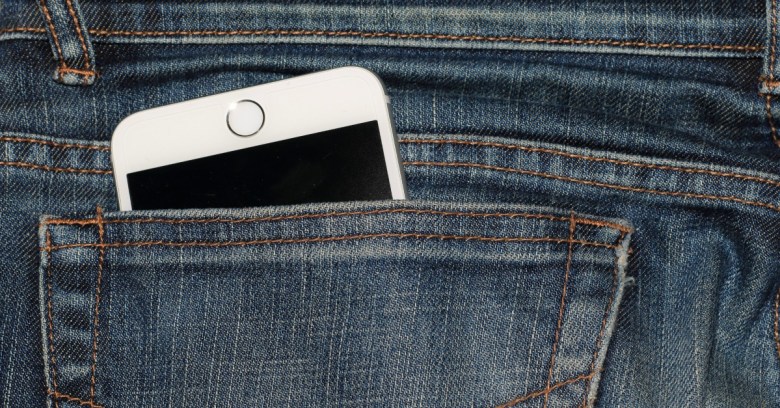 Have you ever taken your child’s mobile phone away, as punishment?

Be careful: it could get you thrown in jail.

That’s what happened to Ronald Jackson, a 36-year-old dad who took away his daughter’s iPhone 4 in 2013, when she was 12, after finding rude texts she’d sent about another girl.

He took the phone away to teach her a lesson, he said.

Jackson, from Grand Prairie, Texas, told CBS that it seemed to him to be simply a case of a parent disciplining his child:

I was being a parent. You know, a child does something wrong, you teach them what’s right.

You tell them what they did wrong and you give them a punishment to show that they shouldn’t be doing that.

According to Mashable, Jackson’s lawyer, Cameron Gray, said his client’s daughter had been trying to organize an attack on another minor, and that’s why Jackson took her iPhone away.

The girl’s mother didn’t quite see it that way.

In fact, Michelle Steppe saw it as theft and called police. Around 2 am, Jackson heard a knock on his door.

It was Grand Prairie police, asking for the phone.

What he told CBS:

I didn’t want the police department telling me how to parent my child. It made no sense to me for them to show up and make a big deal out of something that was a small thing.

I couldn’t believe they would go to this extent for a cell phone. It didn’t seem right.

It got ever more not right: he was handcuffed and hauled off to jail, where he spent the night before paying $1,500 in bail money.

The mom’s rationale: “Number one, the property belongs to me,” Michelle Steppe told WFAA News8.

Number two, she couldn’t tell her daughter that what her dad did was OK, she said:

You can’t take someone’s property, regardless if you’re a parent or not.

The station reports that three months after the phone incident, Jackson received a citation in the mail, for theft of property less than $50 in value, a Class C misdemeanor.

Court documents reportedly show that the city attorney’s office offered a plea deal in January 2014 if Jackson returned the phone.

He did not return the phone. Instead, he hired an attorney and requested a trial by jury.

That’s when the city attorney’s office ratcheted it up a notch, asking that the case be dismissed and refiled as a more stringent Class B misdemeanor, punishable by six months in jail and a $2,000 fine.

On Tuesday, Jackson was found not guilty.

Dallas County Criminal Court Judge Lisa Green ordered the jury to find Jackson not guilty after ruling that the state failed to present sufficient evidence to continue the case.

Steppe told News8 that the verdict confused her, given that she bought the phone and that the coverage plans were under her name.

Even if you purchase something with your own money and have a receipt, it’s not yours. Someone can take it from you.

Jackson told reporters that the saga has alienated him from his daughter and her mother:

I have to separate myself from them. I can’t ever have a relationship with them again.

But it’s not going to stop there.

Jackson’s lawyer, Gray, said he plans to file a federal complaint for civil rights violations for the way Jackson was treated by the Grand Prairie Police Department and the city attorney’s office.

You probably won’t be surprised to hear that Jackson still hasn’t given back the phone.

Readers, who do you sympathize with in this case?

On one hand, we have a dad who deserves credit for attempting to stop what sounds like a brewing case of cyberbullying.

On the other hand, we have a woman who paid for the phone and its coverage plan.

Shouldn’t she have some say in what’s done with it?

More than anything, I sympathize with the police, who had to put themselves between these warring parents as they tried to get the phone back.

We do not like these kinds of instances to go into the criminal justice system. We prefer to keep it out and the phone be returned and let the parents, the two adults, work it out among themselves.

Work it out? Well, that’s a pipe dream, obviously!

Readers, do you have any horror stories about the repercussions of taking gadgets away from kids?

Head south for the comments section, and do tell!