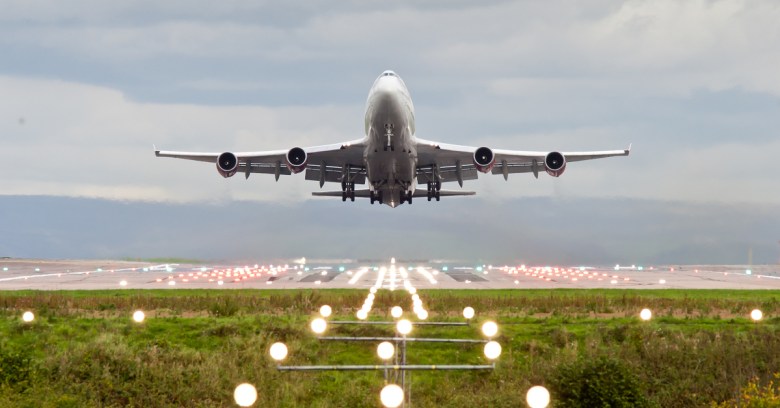 You’re sitting tight in coach. You’re firmly belted for takeoff or landing. Here’s what you don’t want to be thinking: what’s that drone flying near our engines?

Your pilots don’t want to be thinking that, either. So, after four “Category A” near misses outside major UK airports in just a month, they’re freaking out – and speaking out.

In September, reports The Guardian, a six-foot remote-controlled drone passed less than fifteen feet above a Boeing 737’s path, in allegedly “controlled” airspace where it absolutely, positively did not belong.

Just nine days later, a Boeing 777 pilot accelerating out of Heathrow saw a drone “less than a wingspan” away.

Yet another incident occurred in a standard Heathrow holding pattern way up at 8,000 feet: more worries for safety experts who didn’t expect to see consumer drones that high.

Lest you imagine only UK pilots are concerned about sucking UAVs through their jet engines, it’s a growing controversy in the US, too. Check out this disconcerting map of recent drone “events” near L.A. International Airport: 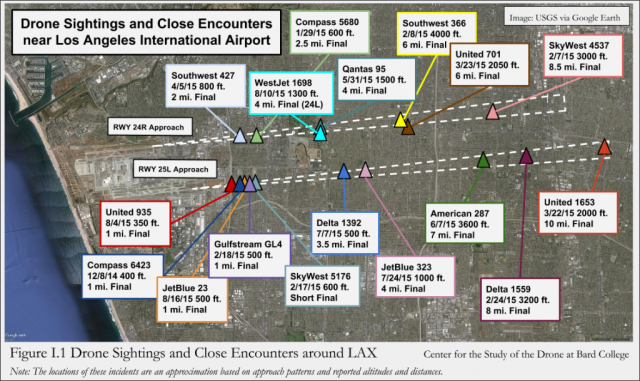 That’s from the Center for the Study of the Drone. (Bet you didn’t know there was such a place: thanks to New York’s Bard College, there assuredly is).

The Center recently studied 921 incidents in US airspace over the past two years. Of those, 594 were no big deal, but 327 incidents “presented some level of hazard to manned aircraft” – including 90 involving commercial multi-engine jets.

These doleful numbers were generated before Christmas 2015, when drones were expected to be the tech gift de rigueur for those not receiving exploding hoverboards. While official sales totals aren’t yet in, US air traffic regulators were preparing to “welcome” up to a million new drones into their airspace.

Most parties agree that most early drone adopters have been fairly saf, especially when well-trained, connected to communities of responsible enthusiasts, and… not drunk.

Plus, certain GPS flight restrictions can be built right into the firmware – as drone maker DJI did after one of its Phantom 2 quadcopters found its way onto the White House lawn. (No! Bad drone! Don’t go there!)

But as the masses take flight, governments and drone makers have some serious education to do. As Slate wrote last March, while covering that deeply unfortunate White House landing, “the drones that have hit the consumer market don’t ship with documentation of areas in the US that are illegal to fly within.”

The Academy for Model Aeronautics’ Know Before You Fly brochures are starting to find their way onto product shelves and boxes. That’s a step in the right direction. (Especially since <snark>people always read the manual</end snark>.)

The US Federal Aviation Administration recently announced basic rules for licensing recreational drones: a small step towards keeping track of what’s in the sky, and who put it there. Although it didn’t take long for someone to challenge the rule in court.

While the FAA claims almost all authority in the US to regulate drones, US states are losing patience and increasingly doing it themselves.

Meantime, another push for drone safety might come from a very different source: insurance companies.

While purely recreational drone use seems currently covered by most US home insurance policies, that’s not true in the UK. There, reports The Telegraph, insurers are worried about drone-flying “amateurs, potential fools, and children” – and are hurriedly scribbling exclusions into their small print.

So if you own a drone, please: Get educated and trained. Fly it safely. Know where not to fly it. You don’t want to bring down an Airbus – whether or not you’re covered by insurance.

Image of Plane taking off courtesy of Shutterstock.com