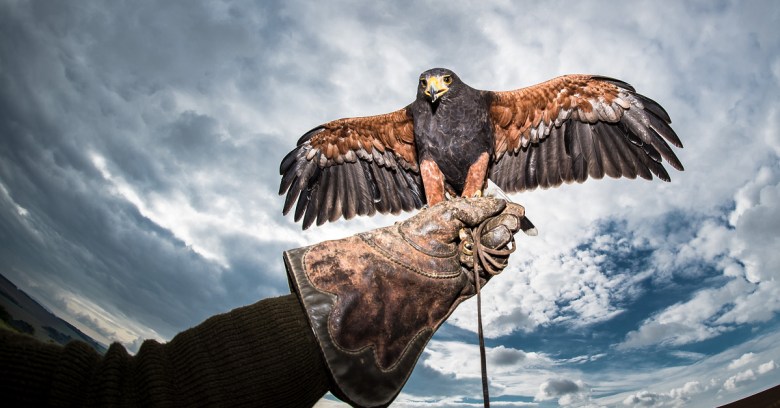 Drones: you try geofencing, you try sound-blasting them out of the sky, you try birdshot.

But still, you get “AAAAAAAHHHH!!!! Drone about to be sucked into jet engine!!!”

While it’s easy enough to jam a drone’s radio to force it to autoland or even try catching it in a net shot out by a bigger drone, either of those drone interception techniques presents the danger of having the gadget turn into a juggernaut as it loses control and plummets toward the ground – and possibly toward people below.

Step aside, foolish species, and cover your heads: it is now time for those with nice, sharp talons to take over.

Dutch police are working on a unique (and eco-friendly, and non-concussion threatening) way to catch unmanned aerial vehicles (UAVs): they’re sending raptors after hostile drones to snatch them out of the air.

As this video shows, eagles are finding it laughably easy to grab the things in mid-flight.

Dutch police are working with a company called Guard From Above that claims to be “the first company in the world to use birds of prey to intercept hostile drones.”

For years, the government has been looking for ways to counter the undesirable use of drones. Sometimes a low-tech solution for a high-tech problem is more obvious than it seems. This is the case with our specially trained birds of prey. By using these birds’ animal instincts, we can offer an effective solution to a new threat.

COO and company co-founder Ben de Keijzer said that two of the most impressive characteristics of birds of prey are their speed and their power, both of which come in pretty handy when you’re knocking somebody’s Christmas toy – or a hostile attacker’s weapon – out the sky.

They are “the masters of the air,” he said, which would sound like marketing fluff speak if the video didn’t in fact show birds snapping up UAVs like so many plump chickens.

Guard From Above didn’t give details on how the birds are trained, but given that their trainers have to coax them into chilling out when the very excited winged killers catch sight of their electronic prey, it’s safe to assume the answer is something along the lines of “raw meat treat” combined with “just get out of the way.”

After the eagles have scored a marauding drone, they fly off to find a safe place to try to eat it.

The meal is unsatisfying, but GFA’s on top of it. As IEEE’s Evan Ackerman describes it, following a few confused bites, the eagles’ handlers reward them with “something a little less plastic-y.”

The Dutch police told news outlets that the tests will last a few months, after which they’ll decide whether this is a viable way to prevent undesirable drone intrusions.

In the meantime, some commenters are worried about the raptors being injured, potentially by large drones, or that the birds’ feet might get shredded.

One commenter even proposed that malfeasants might attach razor blades to UAVs’ propellers.

GFA addressed such concerns in its FAQ, pointing out that the birds’ feet are armored with scales to protect them from their more natural prey, be it striking snakes or biting rabbits.

IS IT DANGEROUS FOR THE BIRDS?
In nature, birds of prey often overpower large and dangerous prey. Their talons have scales, which protect them, naturally, from their victims’ bites. Of course, we are continuously investigating any extra possible protective measures we can take in order to protect our birds.

GFA also says that the Dutch National Police have asked the Dutch Organization for Applied Scientific Research (TNO) to research the possible impact on the birds’ claws.

Image of Hawk courtesy of Shutterstock.com